The Las Vegas Shooter Used 'Bump Stocks.' Now the White House, NRA and GOP Lawmakers Are Open to Restricting Them

A number of congressional Republicans, the White House and gun rights advocates say they are open to restricting “bump stocks” like the ones used in the Las Vegas shooting.

Speaker of the House Paul Ryan, White House spokeswoman Sarah Huckabee Sanders and the National Rifle Association all said Thursday that they were open to having a discussion about bump stocks, which effectively allow a shooter using a semiautomatic weapon to fire at the same rate as an automatic weapon.

“Clearly it’s something we need to look into,” Speaker of the House Paul Ryan said in an interview on MSNBC on Thursday. The NRA later issued a statement saying that the devices “should be subject to additional regulations,” while White House spokeswoman Sarah Huckabee Sanders said the Administration welcomes a “conversation” on restricting bump stocks.

Bump stocks are fastened to the butt-end of a semiautomatic rifle, which typically fires just one round per each pull of the trigger. But the bump stock allows the rifle to slide back and forth against the shooter’s trigger finger under the force of a shot’s kickback, resulting in a more rapid release of ammunition on par with that of an automatic firearm.

Law enforcement officials say Stephen Paddock used two bump stocks to fire hundreds of times into the crowd at the at the Route 91 Harvest Festival at the Mandalay Bay in Las Vegas on Sunday night.

“I hadn’t figured out what they were until this week,” Rep. Mark Walker, a conservative North Carolina Republican who has received NRA support in past elections, said Thursday. “But my thoughts are that we passed a law in 1986 that outlawed automatic weapons. If somebody is circumventing that law, then it’s something we should take a look at. My impulse is that’s something that could be a problem.”

The possibility that bump stocks could be restricted is a change from previous mass shootings, which have led to little action on gun control at the federal level.

“I gotta tell you, it has been so discouraging that there has been an unwillingness to do things that seem very logical and necessary in the area of gun safety,” Sen. Claire McCaskill, a Democrat from Missouri, told TIME on Thursday. “The fact that we might actually get something done is encouraging. Past history tells me [Republicans] are not amenable to much, if the NRA tells them no.”

McCaskill is one of 38 Senate Democrats who have supported a bill introduced on Wednesday by Democratic Sen. Dianne Feinstein of California, a longtime gun control advocate, that would ban bump stocks. Feinstein, who wrote a sweeping ban on assault weapons that expired in 2004, tried to ban bump stocks as part of a larger, unsuccessful gun control package introduced in the wake of the Sandy Hook elementary school shooting in 2012.

However, some Republicans who have scrutinized bump stocks in the wake of the Las Vegas shooting have suggested that a legislative effort be a final option, citing a need to avoid gridlock. On Wednesday, several congressional Republicans, led by Rep. Adam Kinzinger of Illinois, sent a letter to the Bureau of Alcohol, Tobacco, Firearms, and Explosives, asking its officials to “expeditiously reevaluate” the legal validity of bump stocks.

“That is the quickest, most efficient way to deal with this,” Rep. Ryan Costello, a Pennsylvania Republican who supports the letter, said on Thursday. “If that does not happen, and it requires a legislative fix, then to me the question is — what is the best legislative language to address that and not get caught up in broader things? You’re going to have those on the left and those on the right who want to do this and that, and then all of a sudden, we’re not just dealing with that issue.”

Other Republicans stressed that additional gun control measures would fail to rectify the issue of mass shootings in the U.S.

“We have made it illegal for people without special permits to own weapons that are fully automatic, and I have every sense that the consensus is to stay that way,” Republican Rep. Trent Franks of Arizona told TIME. “The problem is a good gunsmith can circumvent almost any of our efforts.”

Others tried to drive the conversation away from gun rights altogether.

“You all in the media are unwilling to look at this in a broader way,” Republican Rep. Jeff Fortenberry from Nebraska said to reporters outside the House chamber on Thursday. “Look at the violent imagery that’s all around us in our society. You go turn on the television in primetime and see heinous murder — and we expect that none of this is going to have an effect? The media profits off of violence and then reacts with outrage when there’s a violent act.” 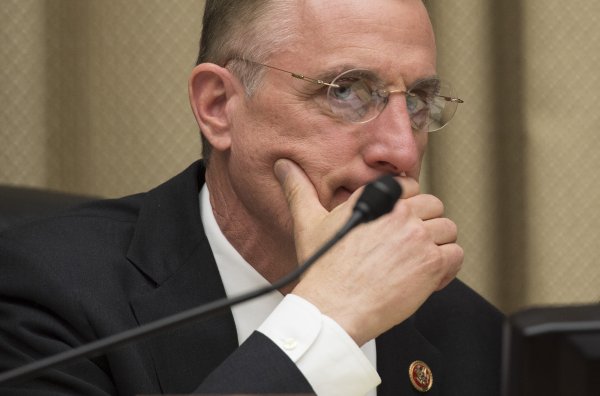