Trump's Desire for a Better Deal With Iran Could Isolate the U.S.

The Iran nuclear deal is in real trouble. Signed in July 2015 by Iran, the U.S., Britain, France, Germany, Russia, China and the E.U., the agreement waived nuclear-related economic sanctions on Iran in exchange for limitations on its uranium-enrichment program. International inspectors say Iran is keeping its end of the deal. But the Trump Administration must certify the country’s compliance every three months, and the President has hinted that he won’t recertify the agreement by the next deadline of Oct. 15.

Trump wants a better deal. He wants to extend the time frame on Iran’s compliance. He wants expanded access to military sites. He says it must stop testing ballistic missiles, which were not part of the deal, and halt its support for organizations that Washington classifies as terrorist groups, like Hizbollah and Hamas. Politically, Trump wants to show that Obama made a bad deal and he can make a better one.

The President’s key Cabinet members don’t agree. Defense Secretary James Mattis told the Senate Armed Services Committee on Oct. 3 that he thinks the U.S. should stick with the deal. Trump’s bigger problem is that U.S. allies don’t agree with him either. They say that Iran has kept its side of the bargain and don’t want to see their hard work torn up. If Trump walks away, he’ll probably walk alone. The Europeans could even decide to continue to honor the deal’s terms, vindicating Iran and creating a rift between the U.S. and Europe even bigger than the one that followed George W. Bush’s decision to invade Iraq in 2003. (Though Bush, at least, had backing from the U.K.’s Tony Blair.)

Trump may feel he has enough on his plate with North Korea without picking another fight with few good options. But he might just instruct his national-security team to refuse to issue a formal certification of compliance, even while holding back from killing the deal completely. He can then demand that Iran offer concessions by a given deadline, while promising to continue to waive sanctions if it bargains in good faith.

Iran’s leaders have good reason to compromise, whatever they say publicly. The lifting of sanctions has given the regime an extra $17 billion per year in oil revenues, and foreign investment has begun to return to the country. Risking new sanctions at a time of still-high unemployment is not an appealing prospect, and Iran doesn’t want blame for breaking the deal.

But Iran could call what it sees as Trump’s bluff. Its leaders can see the Europeans aren’t happy with him, and that even some members of his own party would criticize him for putting a diplomatic milestone at risk. That’s how the deal could still fall apart. 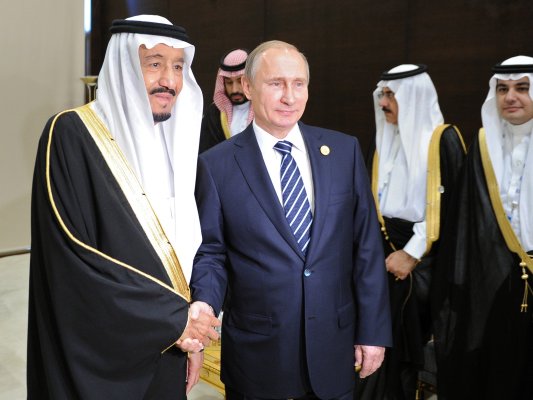 Putin Welcomes Saudi Arabia Into His Middle East Sphere of Influence
Next Up: Editor's Pick