'These Are Just Not Ordinary Times:' Lin-Manuel Miranda on the Making of His New Song for Puerto Rico

Lin-Manuel Miranda isn’t sleeping much these days. Quite literally: he’s spent the past week flying around the country, getting a crew of famous artists — Jennifer Lopez, Luis Fonsi, Camila Cabello, Gloria Estefan and many more — to record a new single, “Almost Like Praying,” out now to support the humanitarian crisis in Puerto Rico. Made with a riff on Sondheim’s West Side Story tune, it’s meant to be a unifying anthem for an island ravaged by Hurricane Maria, with all proceeds going to the Hispanic Federation’s UNIDOS Disaster Relief Fund.

“The name ‘Maria’ will forever have a different connotation on the island,” Miranda explained to TIME. “Most of us know ‘Maria’ as the name of a really great song in West Side Story, a really great love song.” But for Miranda, he saw an opportunity to combine the two — the classic Broadway tale and the current crisis — into a way to help the island of his family’s roots. “My brain started flipping the lyric. ‘Say it loud and there’s music playing, say it soft and it’s almost like praying,’ That was half the idea.”

The other half was including the names of all the island’s towns, as a way to combat the “terrible silence” that greeted the hurricane’s end. “I don’t think I heard from my family until four or five days after,” he explains. Social media was filled with Puerto Ricans seeking loved ones by looking for updates on specific places. “I thought, if I can manage to put every one of the 78 towns in Puerto Rico in the lyric, that’s the song. That’s what unites us all. Because our traditions emanate from those towns, and they’re the source of pride and of power.”

The resulting song combines the voices of over a dozen artists, including Marc Anthony, Fat Joe, Gina Rodriguez and John Leguizamo. If Miranda didn’t know someone personally, like Gloria Estefan, no problem: Rita Moreno called her up on his behalf, and got her into the studio the next day. They all contribute to what the award-winning songwriter calls the catchiest and most “dance-able” song he’s ever written. Many of the artists, he added, didn’t even hear the track before agreeing to be a part of it. But to a one, they signed on, he said. “These are just not ordinary times,” he noted. “So I try to do what I think I do best.”

There’s only so much one song can do. But Miranda says the best way to combat feeling paralyzed by “the totality of what is going wrong in the world” is to take what action you can. “There’s no shortage of challenges, and there’s no shortage of ways to do good, and this is just one of them,” he said. Songwriting just happens to be his strong suit — and a good way to spread a message. “Music travels faster than news,” he noted. “Music travels faster than anything. And if you can thread the needle and do it right, it lasts longer, too.”

Miranda is boosting the cause by also attempting to get more listeners for a Spotify playlist for Puerto Rico. If it reaches 50,000 followers, he’s promised to share a throwback photo of him dressed up as JLo (in faux-Versace and all) for a college event. After seeing the photo, Lopez gave it her stamp of approval, calling Miranda “cute.” “I’ve been holding it back for a special occasion, and this seems like a special occasion, if any,” he added. 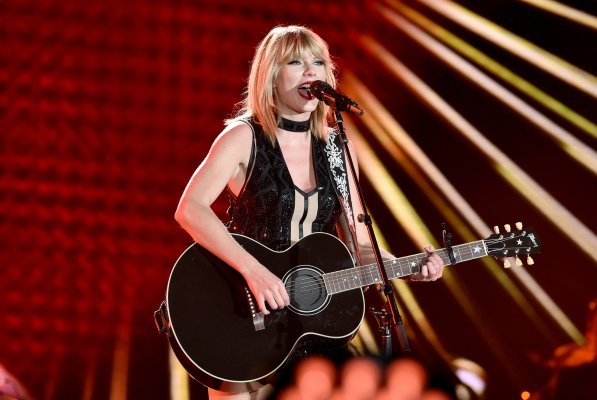 Taylor Swift Remembers How Tom Petty Inspired Her Music
Next Up: Editor's Pick