The Prankster who Interrupted Theresa May’s Speech Has Struck Before

British Prime Minister Theresa May’s speech at the Conservative Party conference on Wednesday was interrupted by a protester who handed her a P45 form — roughly equivalent to a pink slip — and shouted “Boris made me do it” as he was dragged off stage.

This was a reference to Foreign Secretary Boris Johnson, who in recent weeks has been accused of challenging May’s authority in a bid for the top job. But who was the prankster, and what has he done before?

The joker’s real name is Simon Brodkin, although he performs as a comedian under the name Lee Nelson. He has become notorious for staging pranks in public.

In June 2016, Brodkin (disguised in a wig) interrupted a speech by Donald Trump at the the opening of his Turnberry golf resort in Scotland. He attempted to hand out red golf balls emblazoned with swastikas before being escorted away by security. “These are the new balls available from the club house, part of the new Trump range,” Brodkin was caught on mic saying. Trump then continued speaking, still surrounded by the balls Brodkin had dropped as he was bundled away.

In 2015 he crashed Kanye West’s headline performance at Britain’s Glastonbury Festival, and began to perform with him before being forcibly removed from the stage. He later said that “Kanye’d Kanye” for Taylor Swift, whose MTV Awards acceptance speech West controversially interrupted in 2009.

He also once threw fistfuls of banknotes over Sepp Blatter, the ex-president of soccer’s international governing body FIFA, during a corruption scandal at the organization.

Last year, he sailed up to the super-yacht of British billionaire Sir Philip Green and ‘renamed’ it the BHS DESTROYER with a large sign. Green sold off retailer BHS for just £1 last year, even as the company’s pension plan ran up a deficit of hundreds of millions of dollars. The company later collapsed to huge public acrimony in the U.K.

After Brodkin interrupted May today, the Prime Minister, who was battling a lost voice, attempted to shift the attention back to her speech: “I was about to talk about somebody who I would like to give a P45 to, and that’s Jeremy Corbyn,” she said, referring to the leader of the opposition. 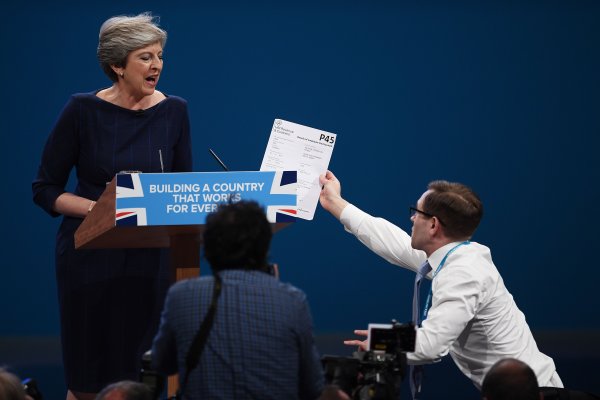 Theresa May Tells U.K. Conservative Party to 'Shape Up'
Next Up: Editor's Pick