Sens. John McCain and Sheldon Whitehouse doubled down on their bipartisan effort encouraging the U.S. Supreme Court to create a new standard for determining the constitutionality of partisan gerrymandering.

The Republican and Democratic senators reaffirmed their efforts Tuesday as the highest court in the U.S. heard oral arguments for a key case that could determine the future of partisan gerrymandering in the U.S. Gerrymandering is the drawing of electoral district lines to favor typically the party in power.

“The Court can clean up a cause of America’s crisis in confidence in our democracy, protect our elections from wildly partisan ‘bulk’ gerrymandering, and return control of our elections to the people,” McCain and Whitehouse said in a joint statement on Tuesday. “We hope the Court will.”

The case, Gill v. Whitford, comes from Democrats in Wisconsin who believe boundaries created in the state were made to benefit Republicans, which the Democrats argue is unconstitutional. In the past, the Supreme Court created a standard to assess whether race was used too much in the remapping of districts. However, the court has not yet created a standard to assess the same issue in its relation to partisan politics.

McCain and Whitehouse filed a friend-of-the-court brief for the case last month, which said “this case implicates the effective functioning of American representative democracy.”

“The American people do not like gerrymandering. It leaves them feeling powerless and discouraged; that their votes are wasted and voices silenced,” they said Tuesday. “They see it rigging our political system to favor special interests.”

“Elections ought to belong to the people,” the senators added. “Increasingly uncompetitive and unrepresentative districts have a corrosive effect on the American democratic process.” 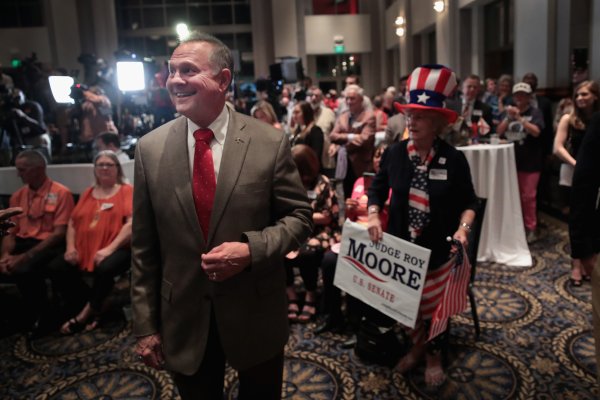 Roy Moore Wins Alabama Race in Blow to Trump
Next Up: Editor's Pick