Las Vegas Was the Deadliest Shooting in Modern U.S. History. Here's Why 'Modern' Is So Important

In the days since Sunday’s shooting at a country music festival in Las Vegas, as Americans have struggled to comprehend the meaning of the event, one fact has been a stark reminder of the act’s impact: that, with at least 59 dead and more than 520 injured, it was the deadliest mass shooting in modern U.S. history.

That phrasing has been inescapable this week, but it also raises a question: in this context, what does modern mean and why does that descriptor matter?

That word’s inclusion is key because mass deaths caused by guns have long been a part of American history. But describing those events and recent ones accurately is more complicated than simply drawing a chronological line between them.

On Easter Sunday of 1873 in Colfax, La., white citizens gunned down and hung perhaps as many as 150 African Americans. On Dec. 29, 1890, U.S. Army soldiers killed 200 Lakota Native Americans with machine guns at South Dakota’s Wounded Knee Creek. And some historians now believe that more than 300 people died in Tulsa, Okla., between May 31 and June 1, 1921, when whites torched the area’s African-American neighborhoods, driving out victims like Mary J. Parrish, who described fleeing with her baby daughter in hand “amidst showers of bullets from the machine gun.”

Then why separate modern American history from what came before? Why not include all of these events on a given list?

In practical terms, one reason is that it’s difficult to determine the exact number of victims murdered in the 19th century — a problem that persists today, too. There’s also a vocabulary issue, as different words used to describe similar events can affect perceptions of their significance. “The mid-2000s is around the time that the phrase ‘mass shootings’ started being used more and more,” Duwe says, “whereas during the 1980s and the 1990s, the phrase ‘mass murder’ is used.” (His research uses the term mass public shooting to describe incidents in which four or more victims are killed with a gun in a public location.)

And on a deeper level, the matter of who the victims are underscores why terms like “modern” are used to clarify statements about shootings, as a reminder that even if earlier such events are hard to count they did happen.

Many have argued this week and in the past that events like the Colfax Massacre and Wounded Knee are seen as separate because, within American history, the deaths of Native Americans and African Americans have not been seen the same as the deaths of white people — and that failing to specify “modern” history while talking about events like Las Vegas only underscores that idea by implying that earlier shootings don’t count. That goes for other minority groups too: For example, on Sept. 2, 1885, white miners in Wyoming went after Chinese miners with guns and hatchets and torched their neighborhoods, killing at least 28 by some counts in what’s known as the Rock Springs massacre.

The fact that the earlier shootings in question targeted minorities illustrates what Duwe says is a noteworthy shift in the motives for such crimes.

“Prior to the 20th century a lot of mass killings were [orchestrated by] the ‘haves’ murdering the ‘have nots,'” he says. In more recent history, “what we’ve seen is people who have perceived themselves as ‘have-nots’ murdering those they perceive as the ‘haves.'”

This shift fosters perception that there are two separate eras of mass shootings, “modern” and pre-modern, even though they are all examples of times when many people were killed by guns. It also means, Duwe points out, that many of these earlier cases were tacitly or explicitly condoned — the killers were the ones in power, after all — so criminal charges were rare.

That’s not to say that mass public shootings of the “modern” type didn’t exist before the last few decades. As Duwe notes, increased urbanization after the industrial revolution is correlated with a rise in mass public shootings, because cities mean more people tend to be together in a close area, and such events go back at least to the beginning of the 20th century. For example, a man named Gilbert Twigg killed nine when he fired into a crowd at a concert in Winfield, Kans., in 1903, an event the New York Times called a massacre.

These two types of mass shootings — by haves and have-nots — thus overlap chronologically, raising the question of where to draw the line for the beginning of modern American history. One possible starting point could be the 1966 Texas Tower shooting. Because that event was captured on television and came following a period of relative domestic tranquility, in terms of violent crime in the U.S., it felt to many people as if it were an “unprecedented” new phenomenon, Duwe says.

According to his research, there have been more than 180 mass public shootings in the U.S. since 1900, but the vast majority of them (more than 80%) have taken place since 1966.

And yet it’s clear that there’s no easy way to compare current atrocities to past ones, especially as news stories continue to evolve. One solution to the problem was proposed in the wake of the 2016 mass public shooting at Pulse nightclub in Orlando, by the National Association of Black Journalists and the National Association of Hispanic Journalists: avoiding such superlatives completely, as comparing a new tragedy to those in history “does it no justice.” 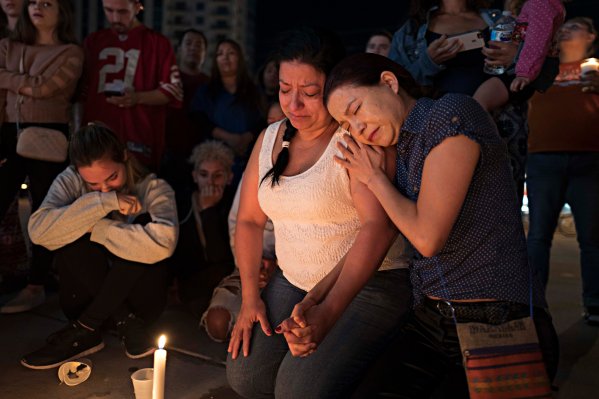 'Unspeakable,' 'Incomparable.' Why Words Fail to Describe the Las Vegas Shooting
Next Up: Editor's Pick