Instead of honoring Christopher Columbus, the Indigenous Peoples’ Day recognizes Native Americans, who were the first inhabitants of the land that later became the United States of America. Advocates for the switch to Indigenous Peoples Day argue that Columbus did not “discover” America in 1492 but instead began the colonization of it. For decades, Native American activists have advocated abolishing Columbus Day, which became a federal holiday in 1937.

This year, both Indigenous Peoples’ Day and Columbus Day are on Monday, Oct. 9.

While the United Nations declared August 9 as International Day of the World’s Indigenous Peoples in late 1994, Berkeley, Calif., had already become the first city in the U.S. to replace Columbus Day itself. The city’s decision was influenced by the First Continental Conference on 500 Years of Indian Resistance in Quito, Ecuador, in 1990, which spurred another Northern California conference that discussed similar issues and brought them to the Berkeley City Council, TIME has reported.

With the exception of Santa Cruz, Calif., and the state of South Dakota, which adopted the similar Native American Day in place of Columbus Day in 1990, the cities, states and universities that have chosen to celebrate Indigenous Peoples Day instead have done so only recently, with cities like Minneapolis and Seattle voting to celebrate Indigenous Peoples Day instead in 2014.

Why is Columbus Day so controversial now?

Critics of Columbus Day argue that the holiday does not celebrate the discovery of America, but instead honors the mass genocide and colonization of the people indigenous to the land.

“[Columbus] was one of the first Europeans to get to the American continent, but there was a lot of history that came after that in terms of the wiping out of native people,” Loni Hancock, the mayor of Berkeley in 1992 and former California state senator, told TIME in 2014. “It just didn’t seem appropriate. It seemed like a reemphasizing of history and recognizing that to be very ethnocentric really diminishes us all.”

What cities are considering celebrating Indigenous Peoples’ Day instead?

Several other cities are considering an alternative to Columbus Day, replacing celebrations of Columbus with that of indigenous people.

A member of Washington, D.C.’s city council proposed a bill to replace Columbus Day with Indigenous Peoples Day, and New York City Mayor Bill de Blasio created a commission to assess the value of monuments of historical figures in public spaces in the city. That includes the monument honoring the Italian explorer in Columbus Circle near Central Park.

Just days before the 2017 holiday, the city council in Austin, Texas, voted to replace Columbus Day with Indigenous Peoples’ Day.

The town of Newcastle, Maine, is considering a change to follow the lead of a number of other cities in the state, though members of the town’s Board of Selectmen’s won’t vote on the matter until the 2017 holiday has passed.

Advocates for the switch have also voiced the desire for the change in Santa Barbara, Calif., Silver City, N.M. and Miami County, Kansas, among other cities. 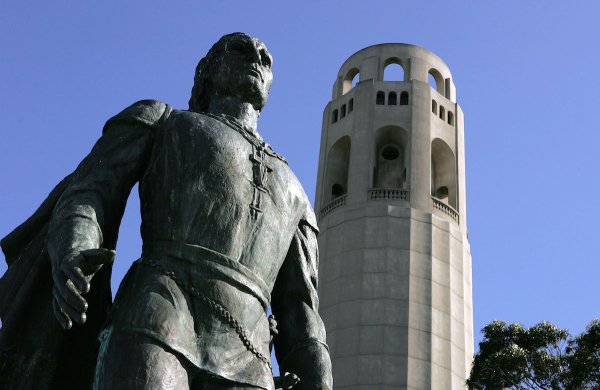 The History Behind the Movement to Replace Columbus Day With Indigenous Peoples' Day
Next Up: Editor's Pick