'We All Know Somebody Who Was There.' Las Vegas Rallies With Water, Blood and Teddy Bears

There’s nothing wrong with the water in Las Vegas.

The grocery stores are open, the roofs are still on homes and there is no great flood after the shooting late Sunday at the Route 91 Harvest Festival across from the Mandalay Bay Resort and Casino in Las Vegas, which left at least 59 dead and hundreds more wounded and became the worst mass shooting in modern U.S. history.

But that didn’t stop people from bringing hundreds of water bottles to a vigil at the corner near the Mandalay Bay on Monday night, and thousands more to University Medical Center of Southern Nevada, where most of the victims were taken after they were shot. They also brought granola bars, pizzas, crackers and cookies. People made prayer circles and signs that declared “Las Vegas Strong,” and raised thousands of dollars on GoFundMe pages to support the victims. Victims gathered in hospitals and in a city convention center. Residents shared stories of heroic strangers. They performed the same rituals practiced after hurricanes in Houston and Miami and San Juan over the last month.

Most of the people at the vigil near the Mandalay Bay were not actually at the concert where police say Stephen Paddock opened fire from above and killed dozens before ending his own life. But they almost all knew somebody who was there. They lit dozens of votive candles and brought teddy bears and signs to remember the victims. Suzanne Mendoza, 37, was supposed to go to the concert on Sunday night, but decided not to because the tickets were too expensive. “I’m trying to process what happened, I don’t understand how something like this is even possible,” she said, wiping away tears. She had tried to find cheaper tickets on Craigslist shortly before the concert, but ended up getting distracted and abandoning that plan. “It can happen to anyone, it’s been proven to happen all over the world and there’s nothing anybody can do,” she said.

Skye Jones, a 21-year old executive assistant, was helping to sell T-shirts that said “Support Vegas” to raise money for victims. She said her co-worker’s daughter was saved by a friend who flipped over a table to shield them from the bullets. Many of the concert-goers were teenagers, she said. “We all know somebody who was there,” she said.

“It makes me really proud of this city to see 6-8 blocks of blood donations,” she says. “After all this that happened, it’s beautiful to see this city come together.”

At the Thomas & Mack Center, which was briefly used as a shelter for survivors, residents showed up asking where to donate supplies. At University Medical Center, families and well-wishers gathered outside to pray and wait for news in front of thousands of cases of water stacked up in drifts. Volunteers set up a room to feed the families as they waited for updates about injured relatives, and at least one person offered “free hugs” inside. In the waiting room of the trauma center, anxious families waited for news as a Yankees game blared in the background.

Inside the Mandalay Bay, things seemed remarkably normal for a place that had played host a mass killer on the 32nd floor only hours earlier. Gamblers busied themselves on slot machines near the lobby, a previously scheduled convention went on as planned. The log-in page to access the resort’s WiFi carried a message: “Our Prayers for the Victims, Our Gratitude for the Brave First Responders.” 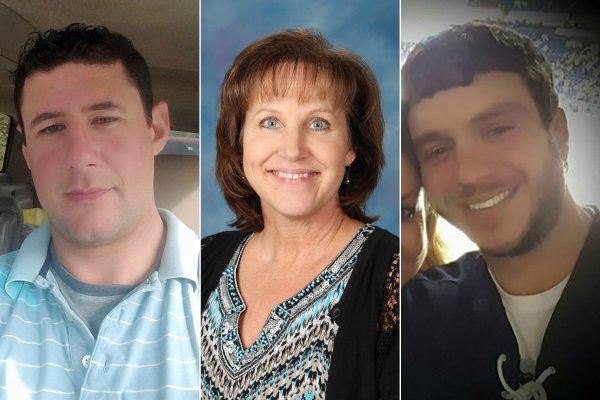 These Are the Victims of the Las Vegas Shooting
Next Up: Editor's Pick