One of the 527 concertgoers injured during Sunday’s deadly Las Vegas shooting was reunited Tuesday with the stranger who helped save his life, in an emotional segment on NBC’s Today show.

Tom McIntosh was among the crowd attending the closing set of the Route 91 Harvest outdoor country music festival when bullets began slicing through the air.

Running for safety with his wife by his side, McIntosh helped her and another female concertgoer escape over the wall on the property. Before he scrambled to safety himself, he was shot in his leg.

“I jumped over the wall and kind of walked trying to get away [but I was] bleeding really bad,” McIntosh recalled Tuesday to Today‘s Savannah Guthrie. “My pants were already soaked and my shoe was full of blood.”

Lucky for McIntosh, James Lawson was there to help.

A complete stranger with Army Reserves training as an EMT, Lawson stumbled upon McIntosh in the back of a pickup truck where another stranger had tried to fashion a belt as a makeshift tourniquet.

“I walked up there and he was actively bleeding,” Lawson said, noting that the belt was in the wrong spot. “I adjusted the belt, got it up there where it should be, tightened it down, stopped the bleeding, hung out there for 10-15 minutes and some savior in a pickup truck asked if we needed a ride. We said, ‘Yeah’ and threw them all in the bed of a pickup truck and we took off the hospital.”

The move saved McIntosh’s life. “I wouldn’t have made it,” he said. “I’m very thankful that James was there to help me.”

As they hugged, both men appeared to get emotional.

“Thanks buddy. I really appreciate it,” McIntosh said. “I was terrified.”

“I don’t remember thinking,” said Lawson. “He kept wanting to not lose his foot and I kept reassuring that. And he’s still got it.”

Lawson was quick to point out that he wasn’t the only hero among the crowd.

“There was dozens and dozens of other concertgoers doing the same thing,” she said. “They couldn’t leave anyone behind — they were running back towards the fire to help people. Hundreds of stories like this one.”

The two men also thanked the stranger who helped drive them to the hospital. “I do want to say that whoever was driving that Maroon F-350, thank you,” Lawson said. “It could have been a whole different night if he wasn’t there where he was.”

Meanwhile, authorities in Las Vegas are still searching for a motive for 64-year-old Stephen Paddock, of Mesquite, Nevada — the gunman who opened fire Sunday night on the crowd of more than 22,000 from his 32nd-floor hotel room at the nearby Mandalay Bay Hotel.

When authorities entered Paddock’s room, they found him dead from a self-inflicted gunshot wound. There is no connection between the shooting and international terrorism, according to the FBI.

On Monday afternoon, officials said that at least 59 people had been killed and 527 more were injured.

How to Help and Learn About Loved Ones

Friends and family are asked to report missing people believed to be connected to the shooting using the hotline 1-800-536-9488.

Anyone with photo or video evidence of the shooting is asked to call 1-800-CALL-FBI.

The city of Las Vegas has established a Family Reunification Center to help connect relatives with the more than 500 people who were injured.

In addition, city officials urged those locally who wish to donate blood to visit one of two donation centers operated by United Blood Services, either at 6930 W. Charleston in Las Vegas or at 601 Whitney Ranch Drive in Henderson, Nevada.

A victims’ fund has been started on GoFundMe by Steve Sisolak the Clark County, Nevada, commission chair. Other groups providing relief include the local chapter of the American Red Cross and the National Compassion Fund. 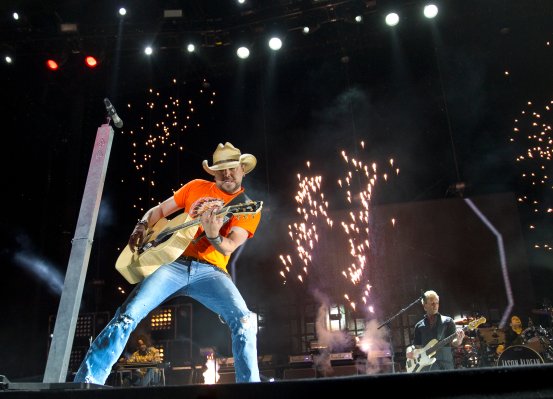 'I'm Afraid to Raise My Children in This World.' Read Jason Aldean's New Message on the Las Vegas Shooting
Next Up: Editor's Pick