The President and First Lady Melania Trump came to Puerto Rico on Tuesday, where they will meet with hurricane victims and participate in briefings with numerous officials, including Puerto Rico Gov. Ricardo Rosselló and U.S. Virgin Islands Gov. Kenneth Mapp.

According to a pool report, Trump and the Mayor exchanged greetings before the briefing. Although there was applause several times, she did not join in.

“I have accepted the invitation on behalf of the people of San Juan and out of respect for the American people represented by the Office of the President of the United States,” Cruz wrote in a statement posted on Facebook. “This is about saving lives, not about politics.”

On Saturday, Trump slammed Cruz on Twitter. “The Mayor of San Juan, who was very complimentary only a few days ago, has now been told by the Democrats that you must be nasty to Trump,” he said. “Such poor leadership ability by the Mayor of San Juan, and others in Puerto Rico, who are not able to get their workers to help. They want everything to be done for them when it should be a community effort. 10,000 Federal workers now on Island doing a fantastic job.”

The day before Trump’s Twitter spree, Cruz held a news conference in which she urged the federal government to help the U.S. island territory, and asked Trump to ensure someone from his administration is “up to the task of saving lives.”

“If anybody out there is listening, we are dying. And you are killing us with the inefficiency,” she said.

Trump said on Tuesday that Cruz has come a “long way.”

“I think it’s now acknowledged what a great job we’ve done, and people are looking at that,” he told reporters before leaving for Puerto Rico.

Trump has faced criticism beyond Cruz for his response to Puerto Rico. Rossello has called the destruction a “humanitarian disaster,” and officials estimate it will be months before the island fully regains power. The President of Oxfam America, an international organization devoted to alleviating poverty, said it is getting involved in the relief effort because of the U.S. government’s slow response.

“Oxfam rarely responds to humanitarian emergencies in the U.S. and other wealthy countries, but as the situation in Puerto Rico worsens and the federal government’s response continues to falter, Oxfam has decided to step in to lend our expertise in dealing with some of the world’s most catastrophic disasters,” Abby Maxman, President of Oxfam America, said in a statement Monday.

Cruz had said that she would be happy to meet with the President. “If he asks to meet with me, of course I would with him. I mean, you know, anything that can be done and anyone that can listen,” she said on ABC’s This Week With George Stephanopoulos last Sunday.

White House Press Secretary Sarah Huckabee Sanders said Monday that the administration had invited Cruz to participate in events with the President during his visit to Puerto Rico.

“This administration, as well as other members on the ground, have reached out to her. We hope that she will join with us in those efforts and be a part of things,” Sanders said. 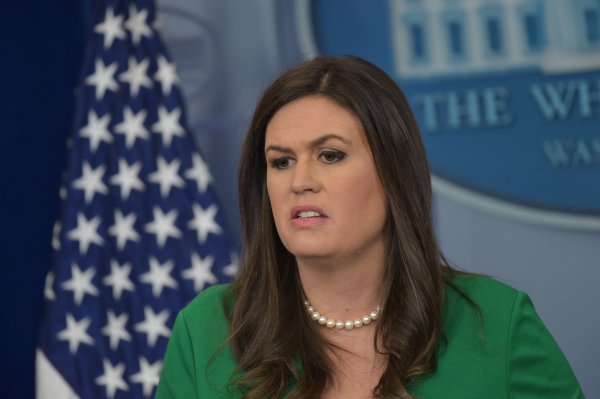 White House: It Is 'Premature' to Talk About Gun Control
Next Up: Editor's Pick