‘It Feels Like Someone Has Opened a Window Into Hell.' Jimmy Kimmel Delivers Emotional Statement On Las Vegas Shooting

Late-night host Jimmy Kimmel struggled to hold back tears Monday night as he called for gun control following what is being called the deadliest mass shooting in U.S. history, which took place Sunday night in his hometown of Las Vegas.

The host of Jimmy Kimmel Live!, Kimmel opened his Monday night show choking up as he detailed how a gunman opened fire on thousands of concert-goers from a hotel room window above the Las Vegas strip, killing at least 59 people and injuring more than 527 others.

“Here we are again in the aftermath of another terrible, inexplicable, shocking and painful tragedy — this time in Las Vegas, which happens to be my hometown,” Kimmel said. “And, of course, we pray for the victims, and for their families and friends and we wonder why — even though there’s probably no way to ever know why — a human being would do something like this to other human beings who were at a concert having fun listening to music.”

Kimmel, who has recently challenged Republican-backed health care efforts and was subsequently thrust into the spotlight as an activist on the subject, expressed disappointment in Republican politicians for failing to support or pass substantial gun control legislation as mass shootings continue to take hold of the country.

“It seems to be becoming increasingly difficult lately. It feels like someone has opened a window into hell. What I’m talking about tonight isn’t about gun control; it’s about common sense,” Kimmel said. “Common sense says no good will ever come from allowing a person to have weapons that can take down 527 Americans at a concert. Common sense says you don’t let those who suffer from mental illness buy guns.”

During his monologue, Kimmel showed the images of more than 50 senators who voted against legislation last year after the mass shooting at Orlando’s Pulse nightclub to close loopholes on the use of background checks on those purchasing guns. Many of those politicians, Kimmel noted, shared messages and prayers for the victims of the attack.

“With all due respect, your thoughts and your prayers are insufficient,” Kimmel said.

Kimmel was one of several late-night hosts to put comedy aside Monday night to make statements advocating for gun control following the mass shooting in Las Vegas. Watch his full remarks in the video above. 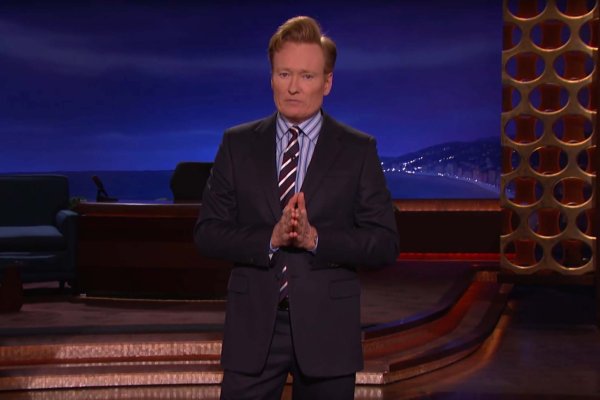