The gunman who opened fire on an outdoor concert in Las Vegas had two “bump-stocks” that would have allowed a semi-automatic gun to shoot more like an automatic weapon, the Associated Press reports.

The devices replace the gun’s shoulder rest with a “support step” that covers the trigger opening, using the recoil from the gun’s firing to bump the user’s finger to “bump” the trigger, allowing it to fire at a faster rate. If bump stocks were used, they would allow Stephen Paddock to fire hundreds of times into the crowd at the at the Route 91 Harvest Festival at the Mandalay Bay in Las Vegas on Sunday night.

What is an automatic weapon?

Is it legal to own automatic and semiautomatic weapons?

Technically yes, but there are a lot of restrictions on them. Automatic weapons manufactured and registered with the government before 1986 can still be legally bought, owned and sold. To buy one, you need to submit fingerprints and photographs to the Bureau of Alcohol, Tobacco, Firearms and Explosives, submit to an FBI criminal background check and pay a $200 tax, among other restrictions.

Sales of semiautomatic weapons are largely regulated on the state level. In 1994, President Bill Clinton signed the Federal Assault Weapons Ban, which outlawed certain semiautomatic guns defined as assault rifles. But the federal law lapsed in 2004.

Can you convert a semiautomatic to be more like an automatic weapon?

Yes, easily, cheaply and legally. There are a couple types of devices anyone can buy that modify a semiautomatic weapon to function more like an automatic weapon with burst fire, USA Today reports. A “trigger crank” or “gat crank” attaches onto the trigger guard, and the shooter then rotates the crank, which will the pull the trigger about 3x per rotation. A “bump stock,” also legal in the U.S., adjusts the stock of the gun so that the recoil itself fires rounds in rapid succession. Both devices are sold online in the neighborhood of about $50 to more than $100. You can’t modify the internal components of the gun to make it fully automatic, but these workaround accessories are perfectly legal.

Have automatic weapons been restricted in the past?

Starting in the Prohibition era, Congress has restricted automatic weapons and gun ownership at key points. The National Firearms Act of 1934, the first federal gun-control law, did not outlaw automatic weapons, but it made them expensive and difficult to obtain. It required recording all sales in a national registry, as well as the tax, background check, and other requirements listed above.

After the assassinations of President John F. Kennedy and the Rev. Martin Luther King Jr., President Lyndon Johnson spearheaded the Gun Control Act of 1968. It implemented a lot of the gun ownership restrictions still in place today – preventing felons and the mentally ill from buying guns and raising the handgun purchase age to 21, among other things — but it had an important effect on machine guns, as well. The Gun Control Act prohibited selling imported guns to civilians “with no sporting purpose,” and automatic weapons were determined to fall in that category. So after this law was passed in 1968, average gun-owners couldn’t legally buy imported automatic weapons.

The Firearm Owners Protection Act of 1986 was passed to prevent the federal government from creating a registry of gun owners, but it had an amendment tacked on that banned civilian ownership of machine guns manufactured after May 19, 1986. There are reportedly fewer than 200,000 machine guns in the U.S. that meet that criteria, according to Slate. So most gun-owners can’t legally get new machine guns, they can just trade these old ones back and forth, which drives up the price, often into the five-figure range.

Ten states limit currently limit automatic weapon ownership beyond the federal rules, Quartz reports, but Nevada isn’t one of them. 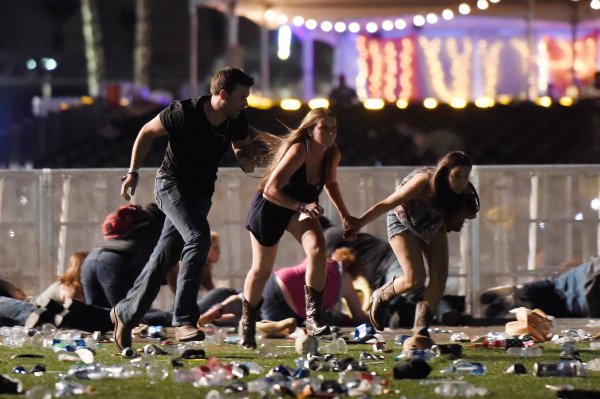 Las Vegas Shooter Stephen Paddock's Father Was Wanted by the FBI
Next Up: Editor's Pick