'It's Incomparable': A Photographer on Covering the Las Vegas Mass Shooting

A woman is carried through the Tropicana by a man and woman after the mass shooting in Las Vegas on Oct. 1, 2017.
Chase Stevens—Las Vegas Review-Journal/AP
By Andrew Katz

“Active shooter.” Chase Stevens, a photographer with the Las Vegas Review-Journal, had just walked through the door of his house when the call from the nighttime photo editor came in. Stevens had spent the night covering a hockey game at the T-Mobile Arena, about a mile away from where gunfire was reported. So he headed back to the Strip. The severity wasn’t yet clear. On the way, he read tweets that alluded to “how devastating it could be”: a little after 10 p.m., a shooter had apparently opened fire at a music festival. Come daybreak, at least 58 people would be dead and some 500 others injured. The latest mass shooting in America became its deadliest in history.

Stevens, 26, parked his Toyota Camry and ran as close to scene as he could. It was a half hour after the first bullets were shot from the 32nd floor of the Mandalay Bay Resort and Casino onto a crowd enjoying the Route 91 Harvest music festival. Jason Aldean, the country crooner performing onstage when the gunfire began, had left. The throngs of concertgoers had fanned out into nearby buildings seeking shelter, toward first-responders in search of care or elsewhere in search of a moment to breathe.

A wounded person is transported in a wheelbarrow after a mass shooting at a music festival in Las Vegas on Oct. 1, 2017.
Chase Stevens—Las Vegas Review-Journal/AP

At a huge medical tent nearby, Stevens tells TIME in a phone call, “there was a guy getting rolled in on a wheelbarrow.” From his vantage point, the photographer didn’t believe the man had survived. “There were people being taken in one after another. There were ambulances taxiing in; several dozens, coming by and picking up people and going.”

Shortly afterward, Stevens saw a commotion near the New York-New York Hotel and Casino. A group of people were running away just as a number of SWAT officers ran by him. He thinks it may have been a false incident but fears at the time were high, so when a basement door at the Tropicana opened to let others in, he ran in too.

A wounded woman is transported outside the Tropicana during an active shooter situation on the Las Vegas Strip on Oct. 1, 2017.
Chase Stevens—Las Vegas Review-Journal/AP

Inside, he saw a number of wounded concert-goers being treated. One woman he saw, a nurse, was assisting a bleeding woman. Some had minor injuries, others appeared emotionally shaken. Hotel employees began to distribute water. “There was a lot of people who had been at the concert and who were under fire and trying to get in touch with loved ones,” he says. “And trying to make sense of the situation, which is what I’m trying to do now as well.”

He began to file his first set of pictures. A short time later, as a woman was being carried by her hands and feet, he took another picture and sat back down to finish. Later, walking through the employee areas, he saw hallways lined with people, most of whom had been at the show.

People wait as the Tropicana goes on lockdown during an active shooter situation on the Las Vegas Strip on Oct. 1, 2017.
Chase Stevens—Las Vegas Review-Journal/AP

Stevens has been with the Review-Journal for about five years: two as an intern and freelancer, three as a staffer. He usually works the night shift, though not typically on a Sunday. He picked up the Oct. 1 shift to cover the hockey game between the Vegas Golden Knights and San Jose Sharks. Previous assignments have included single or double homicides but he usually arrived to the scene after an active shooter situation was declared over, not during. “It’s incomparable to just about anything else I’ve covered,” he says, “and it was crazy.”

He got out of lockdown at about 3:45 a.m, after nearly five hours in the hotel. By about 7 a.m., he was ready to file a set of post-lockdown images and finally get some sleep.

Authorities sweep through a part of the Tropicana during a lockdown following an active shooter situation on the Las Vegas Strip on Oct. 2, 2017.
Chase Stevens—Las Vegas Review-Journal/AP

“It’s a big bustling town at just about every hour: there’s lights flashing, people filling the streets, cars passing by. And it was just dead silence,” Steven says of Vegas. “It’s a place that is a target and that can be very susceptible to a situation like this.”

After a summer of big events—from hockey games and concerts to the Floyd Mayweather-Conor McGregor spectacle, which he covered—“it seemed that all the biggest things had come and gone, and with them perhaps the worries as well.” 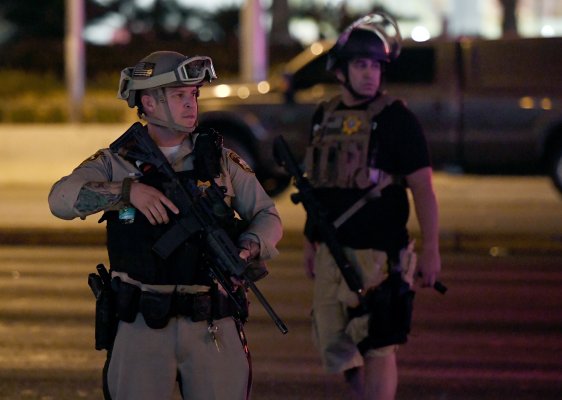 'Many People Down.' Police Audio Captures Frantic Scene at Las Vegas Shooting
Next Up: Editor's Pick