'It Was an Act of Pure Evil.' President Trump Condemns the Las Vegas Shooting

“Our unity cannot be shattered by evil,” Trump said in brief remarks broadcast from the White House. “It is our love that defines us today.”

The President also announced he is traveling to Las Vegas on Wednesday to meet with law enforcement and families of the victims. At least 58 people were killed and over 515 injured when a lone gunman, subsequently identified by authorities as 64-year-old Stephen Paddock, opened fire from his hotel room on the 32nd floor of the Mandalay Bay Resort and Casino onto the Route 91 Harvest country music festival. The death toll, which could still change, makes the massacre the deadliest in U.S. history.

He praised the first responders for their quick reaction to the shooting. “The speed with which they acted was miraculous,” Trump said. “It shows what true professionalism is all about.”

Trump was briefed on the shooting earlier this morning, the White House said, and subsequently added these remarks to his schedule. Earlier this morning, he tweeted a message of support. “My warmest condolences and sympathies to the victims and families of the terrible Las Vegas shooting. God bless you!” he wrote.

The White House also sent a proclamation from the President ordering the American flag to be flown at half-staff through sunset on Oct. 6 to commemorate the tragedy. 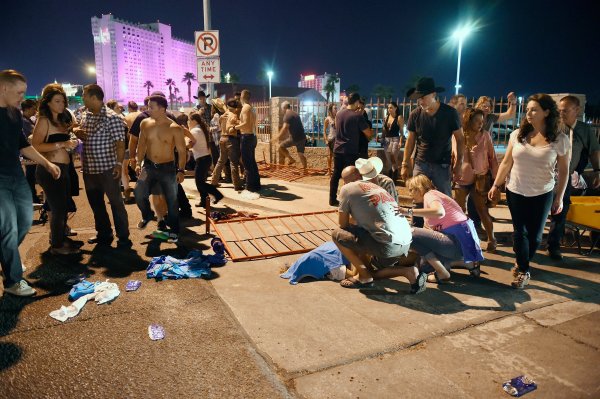