Apps can make you healthier (train for a 5k! watch your insulin intake!), more responsible (swipe through your taxes!), and live a more efficient life (find the perfect movie/takeout/girlfriend!), but they can also egg on your more nefarious side. And in the recent months, there’s been a pronounced uptick in apps that drive antisocial, anonymously catty, all around bad behavior–because at the end of the day, there’s a little bit of each and every one of us that’s kind of awful.

“It’s providing an outlet for a particular behavior that already exists. Girls talk about their exes offline, now they’re doing it on an app,” says Princeton sociology professor Janet Vertesi, referencing Lulu, a Yelp for ex-boyfriends full of hashtag reviews like #WeirdDirtyTalk or #Fartmachine.

Here are just a few of the latest apps that bring out the worst version of you:

The apps that help you judge:
Even if we’re all predisposed to judge, as Vertesi said, there’s something terrifying about Lulu’s creation of a public forum that aggregates women’s anonymous and unaccountable reviews of men. A Yelp for potential boyfriends seems like a terrible idea from the get go — these are people, not taco trucks — and leaves everyone looking bad. But some people are into both judging and being judged. After public backlash, Lulu changed its policy so that men had to opt-in in order to be reviewed on the app. That means some guys want hashtag reviews about their sexual proclivities…

(Tinder is also pretty judgey, but the matches are so ephemerally that no one really gets their feelings hurt.)

The apps that help you avoid all of your friends:
There’s a new wave of anti-social apps that have the explicit purpose of helping users avoid their friends. Why? The name of one of the apps serves as a sound explanation: Hell Is Other People. This harshly titled app uses geo-tracking data from Foursquare to warn users whenever they are getting too close to where a friend recently checked in, highlighting safe zones on a map.

Those who don’t think that Foursquare tracking provides enough coverage can download Cloak, marked as “Incognito mode for real life,” which also pulls from Instagram locations. (It was created by avoidance expert Chris Baker, who created a Facebook plugin that replaces your friend’s baby Facebook photos with pictures of bacon.) Split pulls from Instagram, Foursquare, Facebook, and Twitter for optimal avoidance. Users create lists of Facebook friends they want nothing to do with, and the app beeps and provides alternate routes to avoid contact. Sure, sometimes you have a bad hair day or don’t want to see your ex, but this seems a little excessive.

The apps that were made for throwing shade:
Anonymous social apps like Whisper and Secret, which allow users to publish their own posts and comment on other people’s confessions, are having a Silicon Valley moment–but that might not be a good thing. This faceless forum opens people up for trolling, gossip, and vitriol.

“It is … Perez Hilton. TMZ. Joan Rivers. Geraldo Rivera. All rolled up into one anonymous bitchy session,” investor Mark Suster told Business Insider. And people aren’t using these app to throw shade, they’re using it to humble brag. Nobody wins.

The app that lets you leave completely annoying group chats:
Rumr is a new anonymous group messaging app that allows a user to pick a group of friends — you know who they are, but they have no idea who you are. While this can lead to obnoxious trolling, the name is blatantly begging people to start rumors. Rumr risks being even more hurtful than Whisper and Secret since you know the shade is coming from someone you know. We’re sure will go over well in the middle school crowds. (With $800,000 in funding, investors are counting on it.)

There are apps that help you commit crimes (both real ones and those against humanity):
Some explicitly, and others explicitly. Phantom Alert puts hidden police cameras and DUI checkpoints into users’ GPS systems. Cosmopolitan’s Sex Tip of the Day app features a lot of water-based suggestions like breaking into pools, not to mention their sex tips should be illegal.

The apps that help you spiral:
The first time you Baldified yourself it was kind of funny. It’s time to stop now. 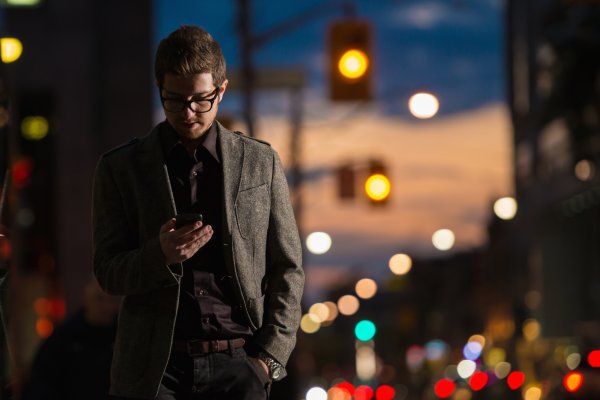 This App That Makes Sure You Get Home Safely Is Your New Overprotective Mom
Next Up: Editor's Pick