Review: Myanmar's Enemy Within and the Making of Anti-Muslim Rage

A Rohingya girl rests at a refugee shelter Aceh, Indonesia on May 19, 2015.
Ulet Ifansasti—Getty Images
Ideas
By Mary Callahan

Recent weeks have likely forever stained Myanmar’s widely heralded transition from direct military rule. From a feel-good story of the retreat of the military and the rise to power of Nobel laureate and democracy icon Aung San Suu Kyi, the catastrophically divided nature of Myanmar society has been revealed as the source of new militancy, horrific ethno-religious violence, and refugee flight on a scale not seen since World War II.

All this from a country populated by 90% Buddhists? The world is now in want of answers as to how the country’s transition could have taken so drastic a turn, and about the origins of such hatred among a population long viewed as a peace-loving civilians suffering under a violent regime. In his debut book, Myanmar’s Enemy Within: Buddhist Violence and the Making of a Muslim “Other,” journalist Francis Wade seeks to provide those answers and explain the ferocity unleashed in the name of Buddhism since 2012.

At its finest moments, Wade’s book tells the personal stories of Muslim and Buddhist characters who have animated the tragic scenes of Myanmar’s deadly morality play; the story of a transition from repressive authoritarian rule not to democracy, but to an awakening of deep-rooted, angry, racialized movements dedicated to ridding the country of those who do not belong. Take U Parmoukkha for example, a senior Buddhist monk who told Wade that Islam was innately violent. Or Ma Win, an ethnic Kaman – a Muslim minority that qualifies for citizenship, unlike some other ethnic groups – who was beaten by ethnic Rakhine produce sellers for being “kalar,” the derogatory term denoting South Asian origins.

Wade’s central theme is that the military manipulated Buddhism since it seized power in 1962 to fuel fervor for its largely coercive and homogenizing nation-building project. Out of this maneuvering, Wade claims, rose the extremism that dominates transitional Myanmar today, from which the stateless Rohingya Muslim minority has suffered disproportionately. “So violently had notions of identity and belonging been manipulated and thrust to the center of life under the military that, as it began to step back, those contestations formed a core part of the search for the new Myanmar,” Wade writes.

As reforms unfurled after 2011, that fervor was taken up by a range of forces, including Buddhist farmers who told Wade they traveled in 2012 to Muslim villages with machetes and torches to attack Rohingyas, who were their former friends and business associates. Rohingya bands retaliated. Hundreds were left dead, villages burned beyond recognition and coexistence among many Rakhines and Rohingyas no longer thinkable. One Rakhine Buddhist explained his fear of Muslims from a nearby village: “If they come we will kill them or they will kill us.”

Political and moral authorities did little to control the violence. Suu Kyi, who is now the country’s de facto leader, steadfastly evaded questions on the bloodshed, which, as Wade argues, meant “she and her party were complicit in fueling the mentality” that led to the debasement of the Rohingya. Almost overnight, “the importance of the nationalist cause had outflanked that of the democratic cause,” for many Buddhists, Wade writes. Inter-communal, mostly anti-Muslim violence soon spread to other towns, led by monks and gangs of thugs, the latter usually described to Wade by victims as “outsiders” to the communities affected. Perceptively, the author notes the ambiguity around perpetrators: “Exactly which forces were driving the violence never became clear.” By 2013, ethnoracial Buddhist nationalism had hugely empowered the politically and socially influential Organization for the Protection of Race and Religion (known by its Burmese acronym, Ma Ba Tha) and monks such as U Wirathu, known for his hate-filled diatribes.

Myanmar’s Enemy Within is well-timed to inform debates about Myanmar’s most violent crisis of the last 25 years, but it founders on factual misreadings of history. Most importantly, the overall narrative is inaccurate; Myanmar’s military did not promote Buddhism as its nation-building tool until after a democratic uprising in 1988. In fact, when it entered power in 1962 and established a socialist regime, it halted its civilian predecessor’s attempt to make Buddhism the state religion. Wade conflates the socialist period (1962-88) with the military junta era (1988-2011). During the former, Socialist ideology, not zealous promotion of Buddhist, gave rise to the laws and attitudes that led to the “othering” of the Rohingya and the eventual emergence of widespread Islamophobia. Wade’s readable explanation of the creation of the enemy within may be incomplete, but his work remains bold and brave in its attempt to tell a story of Buddhist rage in Myanmar. 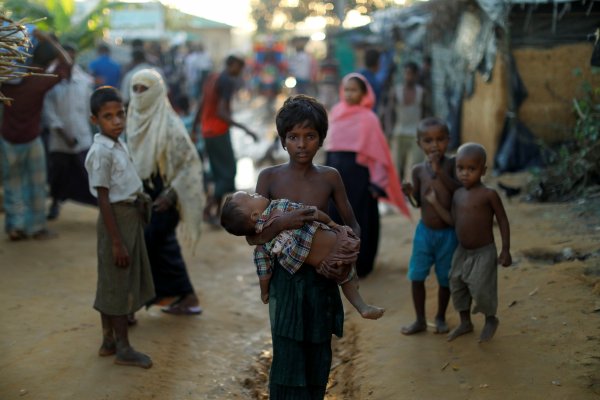 U.N.: Myanmar Military in Campaign Against Rohingya
Next Up: Editor's Pick