Catalonia Just Voted for Independence From Spain. Here's Why That Is Unlikely to Happen

Constituents in Spain’s Catalonia region voted for independence in a disputed referendum Sunday that left more than 800 people injured after Spanish riot police used batons and rubber bullets on civilians attempting to cast their ballots.

Catalonia has “won the right to become an independent state,” the Associated Press quoted Catalan President Carles Puigdemont as saying after the polling. He also promised to make good on an election pledge to unilaterally declare independence for the region should its constituents vote “yes” in the referendum.

Puigdemont added that he would ask the European Union to investigate human rights violations during the vote and accused Spain of writing “another shameful page in its history with Catalonia.”

Some 90% of the 2.26 million Catalans who voted cast ballots in favor of independence with 15,000 votes left to count, according to Catalan regional government officials. Some among the 5.3 million people eligible to vote in the region were prevented from doing so after police seized ballot papers, AP reports.

On the face of it, the results of the referendum appear to indicate a strong preference for Catalan independence from Spain. But here’s why that’s unlikely to actually happen.

What is Catalonia and why is it holding a vote?

Catalonia is a region in Spain that is separated from France by the Pyrenees Mountain Range to the North. It stretches along the Mediterranean Coast encompassing Spain’s second city Barcelona, before ending above Valencia — the region has been a part of Spain since the 15th century.

Secessionists have long argued that Catalonia — whose economy is larger than Portugal’s and generates about a fifth of Spain’s total GDP — gives way more than it gets. It’s an argument that has gained traction in the wake of 2008’s global financial crash. According to Reuters, Catalonia contributes $12 billion more taxes than it gets back from Madrid, whereas Spain’s poorest region Andalusia, receives $9.5 billion more than it pays in.

Read more: What to Know About the Catalan Independence Referendum

But identity politics as well as economic issues factor in a region that still stings from Francisco Franco’s fascist regime. The Spanish dictator banned the Catalan language from the school system and suppressed Catalan institutions. After the government refused to allocate more funds to the region or give it fiscal independence in 2012, some argued that Catalans are still being squeezed by Madrid.

Why did police crack down on the vote?

Catalan health services reported that 844 people had been treated in hospitals and recorded injuries consistent with being hit by rubber bullets, according to AP. In turn, Spain’s interior ministry has posted videos showing protesters hurling objects at police — 33 of whom have reportedly been hurt.

Late on Sunday, Rajoy thanked the police for acting with “firmness and serenity.” Spain’s foreign minister Alfonso Dastis described the violence as “unfortunate” but said it the police’s actions had been “proportionate.”

Such comments are likely to inflame an already tense situation in Catalonia and galvanize support for the region’s independence bid.

While Puigdemont has resolved he will declare independence for Catalonia within 48 hours on the back of Sunday’s vote, the official line from Madrid is that its result is meaningless.

“Today there was no referendum on self-determination in Catalonia,” Rajoy said at a press conference early Monday morning. He added that the majority of Catalans had obeyed the law and not voted and urged local officials to now give up on their independence aspirations.

Giving up those aspirations seems unlikely, but the Guardian suggests that a unilateral declaration of independence might result in Madrid taking over Catalonia’s regional government. That in turn, would deepen the rift between secessionists and the central government and likely spur more violence.

On Monday morning neither side appeared ready to cede ground. Catalonia’s government said it would hold a closed-door cabinet meeting to discuss the next steps in the plan to declare independence; meanwhile, Rajoy is set to convene with leaders of his People’s Party and has called for a meeting with the leader of the opposition Socialist party to discuss the escalating crisis.

A recent poll commissioned by the Catalan government showed that 41% of people in the region were in favor of a split from Spain but 70% of those surveyed supported Catalans’ right to vote on the issue. In the wake of Sunday’s police crackdowns and Rajoy’s intransigence, it’s a good bet both of those numbers have swelled. 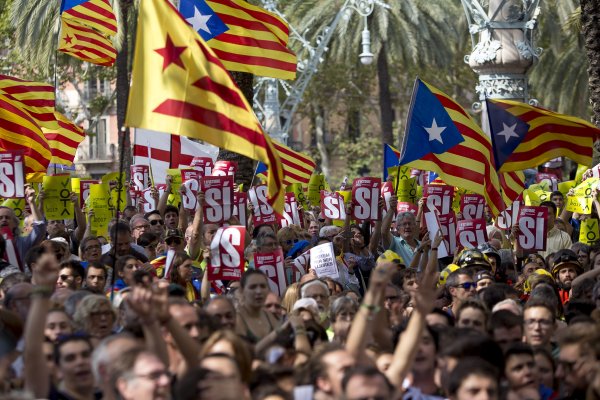 What to Know About the Catalan Independence Referendum
Next Up: Editor's Pick