Tom Price, the embattled Health and Human Services Secretary whose use of costly private jets put him on the outs with President Donald Trump, resigned under pressure on Friday.

Price, the first member of the President’s Cabinet to leave the administration, spent more than $1 million on private planes to ferry him to Europe, Asia and around the U.S. The revelation left the White House embarrassed and angry, Republicans in Congress fuming about waste, and the President himself worried how it would look.

Price attempted to calm the furor, offering to cover some of the costs, including a $25,000 trip from Washington, D.C., to Philadelphia. But in the end, Trump had seen enough. As he left the White House on Friday afternoon, he said cryptically that he’d soon decide Price’s fate. But shortly after Trump landed in New Jersey on the way to his nearby golf club, the White House press office released a statement saying that Price had offered to resign and the White House had accepted.

The quick exit was unlikely to end the problems of private planes for the Trump team. Treasury Secretary Steve Mnuchin, Interior Secretary Ryan Zinke and EPA chief Scott Pruitt have their own transportation issues brewing, and there’s no telling if others in the President’s ultra-wealthy Cabinet have used private aircraft instead of opting to use the government discount on major commercial carriers, as is preferred.

Republicans and Democrats on the Hill are demanding answers—and, perhaps, scalps. Trump ran for office pledging to “drain the swamp” and to end business-as-usual in Washington. Instead, his team appears to have engaged in the exact types of offenses he said vanquished Democratic rival Hillary Clinton represented. Trump’s voters, many of whom cheered Trump’s attacks on elitism, stand to sour on the President if he turns out to be just like any other politician: a busy individual who is unable to police everyone on his team.

Price, a surgeon by training, was elected to Congress in 2004 and was a favorite among the conservative wing of his party. He stepped down from his seat earlier this year to guide health policy for the new-to-Washington President. Yet efforts to scrap Obamacare as promised never came, and the existing health care system has proved wobblier than perhaps Trump realized.

Trump had considered dumping Price after the first time healthcare faltered, but decided to keep him on. That was before his travel schedules became a political liability. The best Trump could muster, when asked Wednesday about his HHS chief, was a coy “we’ll see.”

By Friday evening, everyone saw, yet again, the limits of the President’s loyalty and the frail hold anyone in Trump’s orbit has on his or her job.

“I have spent forty years both as a doctor and public servant putting people first. I regret that the recent events have created a distraction from these important objectives,” Price wrote in his letter of resignation. “Success on these issues is more important than any one person. In order for you to move forward without further disruption, I am officially tendering my resignation.” 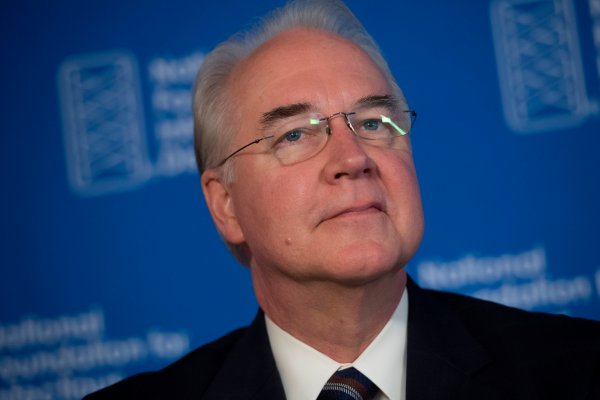