An Image of an NFL Player Burning the U.S. Flag Is Circulating on Social Media — It's Fake

Amid heightened tensions between the NFL and President Donald Trump, an image of one of the league’s players burning the American flag is circulating around the internet. It’s fake.

The “photograph,” which has made its way across Facebook and Twitter, shows Seattle Seahawks defensive end Michael Bennett enthusiastically burning the flag in a locker room as his teammates and head coach Pete Carroll happily look on. The picture is photoshopped.

But, as you can see, there is no flag, and there is certainly no fire. But that didn’t stop people from sharing the doctored image.

But even some anti-NFL users could see that the image is fake. For one, Bennett’s hand holding the flag looks off. And two, no sprinklers are going off as a fire burns in a public building.

TIME has reached out to the Seattle Seahawks and will update if the organization comments. 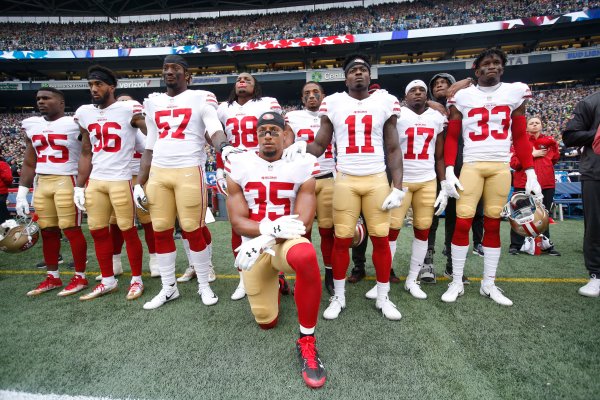 NFL Player Who Helped Start Kneeling Movement Says This Is What Trump Gets Wrong About It
Next Up: Editor's Pick