A woman look out from her damaged house in San Isidro, Puerto Rico on Sept. 28, 2017.
Andres Kudacki for TIME
By Justin Worland

Even before Hurricane Maria hit Puerto Rico, the island’s electric grid was in bad shape. Nearly half the country’s electricity came from expensive oil shipped to the island. Power outages occurred frequently, and electricity prices were higher than anywhere else in the U.S. except Hawaii. The territory’s electric authority, mired in debt, could not afford to fix the problem.

Those problems now seem minor by comparison. The vast majority of the island’s population is currently living without power. Authorities acknowledge they need months before power returns to some regions. Still, energy experts say the rebuilding effort offers a unique opportunity to outfit the island with the electric grid of the future: a state-of-the-art system built from scratch using renewable energy sources like wind and solar, which would be cheaper to operate and would respond better to the next hurricane.

The reimagined grid would rely on the concept of a microgrid, which are localized electric grids that allow communities to keep power even if centralized power plants are not functioning. Microgrids incorporate small-scale power plants—think small solar arrays, or a couple of wind turbines—as well as energy storage solutions like batteries to keep electricity flowing. Transmission lines can connect microgrids to the wider grid, but the link is not necessary.

The idea was touted on Friday by Puerto Rico Governor Ricardo Rosselló, who said he was considering it as one possible step for the island territory of 3.4 million.

“We can start dividing Puerto Rico into different regions… and then start developing micogrids,” says Rosselló. “That’s not going to solve the problem, but it’s certainly going to start lighting up Puerto Rico much quicker.”

Moving to energy sources like wind and solar also makes sense from an economic perspective, according to energy policy experts. Using microgrids would mean that the island could avoid investing in expensive long-distance transmission lines, which could easily be destroyed by the next storm. Wind and solar would also allow Puerto Rico to move away from oil, a relatively expensive commodity when compared to other electricity sources.

“If the standard was that Puerto Rico should procure the cheapest electricity for its residents, it’s not oil,” says Jeff Navin, a former deputy chief of staff at the U.S. Department of Energy. “Solar and wind, and frankly anything else, are going to be much cheaper.”

Despite these advantages, there’s no guarantee Puerto Rico will move to a renewable smart grid as it rebuilds. Prior to Maria, the island’s energy authorities were slow to move toward renewables, instead planning a transition to natural gas that included a $380 million liquified natural gas terminal. Natural gas, the cheapest source of electricity in many parts of the country, provides the most logical alternative to wind and solar in Puerto Rico. But a number of barriers remain, including the high capital costs of building new transmission lines. The challenge of getting natural gas to the island is compounded by the Jones Act, a federal law that requires such shipments to be made on U.S.-made ships.

Perhaps more importantly, Republican officials in Washington will need to sign off on recovery funding. In the past, many have shown little enthusiasm for renewable energy sources. The Trump administration has launched a number of initiatives in recent months aimed at improving the coal, nuclear and oil and gas industries.

Indeed, Energy Secretary Rick Perry suggested this week that the next generation of nuclear power plants may be the right solution for Puerto Rico, though realistically such a solution would take years to complete.

“Wouldn’t it make abundant good sense if we had small modular reactors that literally you could put in the back of C-17 [military cargo] aircraft, transport it to an area like Puerto Rico, and push it out the back end, crank it up and plug it in?” he asked a clean energy gathering this week, according to a Bloomberg BNA report.

If Puerto Rico wants to restore electricity to the island as quickly as possible over the coming months, nuclear power is not the fastest solution. But whatever the island does, it will likely need the support of Republicans to help pay for it. 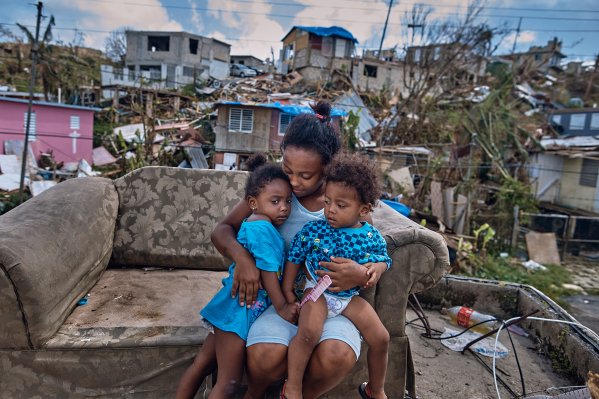 Puerto Ricans Rely on Each Other While Waiting for Aid
Next Up: Editor's Pick