Where Hurricane Maria Fits in the History of Puerto Rico

The deadly impact of Hurricane Maria on Puerto Rico, as this week’s issue of TIME explores, has led to extreme devastation and a potential humanitarian crisis, as well as a political battle over the federal government’s responsibility to the island residents who have not received the same level of assistance as their fellow citizens in Texas and Florida did the wake of other recent hurricanes.

And, amid the destruction, many mainland Americans have also come to realize just how little they know about Puerto Rico and its past. As the nation struggles to come to grips with the extent of the recovery effort that will be needed, Jorge Duany, author of the recent book Puerto Rico: What Everyone Needs to Know, spoke to TIME about how the island’s past is affecting the current situation.

TIME: Is there any moment from the past that’s parallel to the crisis in Puerto Rico right now?

DUANY: The only other parallel I think that one can find is the hurricane in 1928, which devastated the island. But we don’t really know right now all of the effects of this hurricane, Maria. For instance, the number of deaths is still unknown, and the impact of the recovery is so large that it’s going to take a few weeks, perhaps months, to even know the degree of devastation.

At that time, Puerto Rico was largely an agricultural economy and relied on sugar, coffee and tobacco. Those crops were destroyed. Most of the population living in the countryside was also affected. I think the fact that Puerto Rico has become a more urban and modern society in the last few decades means that people perhaps are better prepared in terms of resisting the effects of the hurricane.

What about the political situation? Is there a situation from history that mirrors the current government reaction to the hurricane?

The Depression would have been one of those moments, of course, and I think the fact that the natural disaster in 1928 was so close to the depression, that complicated matters. One of the things that the federal government did at that time was to extend the benefits of the New Deal, at a smaller scale. Many of those federal programs were also applied to Puerto Rico in order to speed up the recovery.

Then, after World War II, with the growing movement to decolonize various places around the world, particularly in the Caribbean and Africa and South America, that also had an impact on Puerto Rico. That led eventually to the establishment of the current commonwealth status, so that was a crisis of colonial governance, which many people think is still very much with us. The Jones Act goes all the way back to 1920 and clearly it was passed to benefit the United States and not Puerto Rico, because of the expense of using U.S. shipping facilities. I would say those are the two critical moments.

And then, since the 1960s and especially in the ‘70s, the Puerto Rican economy entered into a recurrent series of crises, after having grown quite quickly in the ‘50s and ‘60s. Since 1973, the Puerto Rican economy has faltered and not improved its performance compared to those bright years in the postwar period. And more recently the recession beginning in 2006, which was caused largely by the phase-out of the tax exemption program for U.S. companies in Puerto Rico, that has led to continuous decline in the last decade, including the tremendous public debt.

What should people know about why the economy has had so much trouble?

The whole industrialization strategy, Operation Bootstrap as it was known then, was based on the premise that Puerto Rico could pull itself by the bootstraps by attracting U.S. capital and luring various manufacturing companies. In the beginning it was manufacturing that would come to Puerto Rico because of the low wages and the facility of transportation between the U.S. and Puerto Rico, and basically no taxes. Once those programs were phased out, primarily at the federal level, then basically you saw most of these companies fleeing Puerto Rico, looking for a better deal in places like Mexico and the Dominican Republic and eventually China. That’s part of a worldwide process of de-industrialization and the growth of these new industrial economies.

Do you think the attitude of the U.S. government toward Puerto Rico right now is historically consistent with the rest of the commonwealth period?

I think it’s been going up and down. There have been moments where Congress and the White House have paid more attention to Puerto Rico. For instance, the issue of the relation between the United States and Puerto Rico has been revisited by Congress and there have been hearings about what to do with Puerto Rico. After all, the ultimate power resides in Congress not on the island, but nothing has come out of it except for several plebiscites, the latest of which was inconclusive because most people did not participate.

It takes a crisis of major proportions like the one we’re facing now for the federal authorities to pay attention. Today, there’s been an announcement that President Trump is going to waive the Jones Act, at least temporarily, but it doesn’t seem to be a priority for federal policy makers most of the time.

Do you think this crisis will change that?

I think it will. One of the basic issues is the lack of knowledge about Puerto Rico in the U.S. and recently I saw one of many polls showing that [many] Americans don’t even know that people on the island are U.S. citizens. There’s just a general lack of information. That’s understandable given the size of the island and its complicated relationship with the United States, but at least this might be an opportunity to inform. 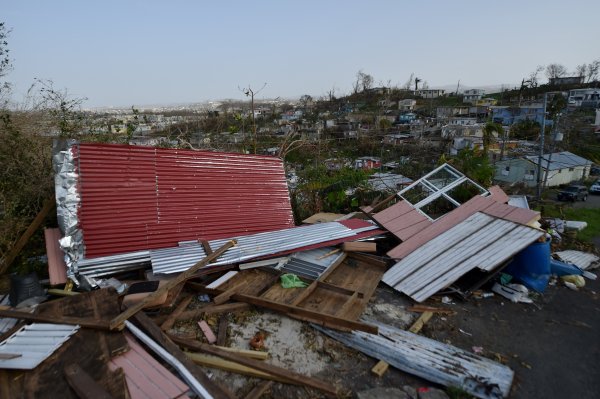 What to Know About The Impact of the Jones Act on Puerto Rico Aid
Next Up: Editor's Pick