The El Capitan monolith in the Yosemite National Park in California on June 4, 2015.
MARK RALSTON—AFP/Getty Images
By Julia Zorthian

The natural wonders of Yosemite National Park are so striking that it’s possible to forget that a visit to the park can turn deadly.

But the rock fall that killed one and injured another on Wednesday is a stark example of how the park claims lives each year. Many people witnessed as the giant slab of granite cascaded off the massive monolith El Capitan near an area popular with hikers.

Some deaths result from climbing accidents, while others take place when visitors take their own safety for granted. And many are just freak accidents — reminders that venturing into the wild always has dangers associated with it.

Since thousands of people visit Yosemite annually, the numerical probability of death is very low. People dying while visiting the park has been well-documented since recording began nearly 170 years ago, though. One ecologist even wrote a whole book about it in 2007 called Off the Wall: Death in Yosemite to warn people about taking necessary precautions.

Here are some of the most notable recent deaths that have taken place at Yosemite, due to a wide range of accidents.

Renowned rock climber Dean Potter, 43, died while BASE jumping off Taft Point in 2015. He and a fellow climber, 29-year-old Graham Hunt, were killed slamming into cliffs they failed to avoid.

A GoPro camera mounted on Potter’s helmet captured the moments before his death.

Brad Parker, 36, fell to his death while rock climbing mere hours after his girlfriend accepted his marriage proposal in the park. After calling his father to say it was the happiest day of his life, Parker decided to climb Matthes Crest alone.

The yoga instructor had completed the climb before and was on an established route without climbing equipment when he fell 300 feet to his death.

Three people in their twenties fell to their deaths together in the cascade of the 317-foot Vernal Fall. The group had disregarded safety fences and signs and were reportedly having fun in the area before two slipped into the water and a third tried to save them.

Nearby hikers described the horrifying scene of seeing the three people swept over the ridge. The deaths taking place in a clearly-marked danger zone threw a national spotlight on the importance of safety measures in the park.

The massive Yosemite Valley Landslide of 1996 killed one person and injured several more when a 200-foot-long granite chunk slid down a cliff into the Happy Isles trail, where people often hike.

The impact of the 162,000 tons of rock was roughly equivalent to the strength of a 2.15-magnitude earthquake, Witnesses said it took nearly 45 minutes for the dust to settle so recovery efforts could begin.

When lightning hit five hikers on top of the renowned Half Dome, two were killed and three were injured. The group had been sitting on top of a cavern when the lightning struck. 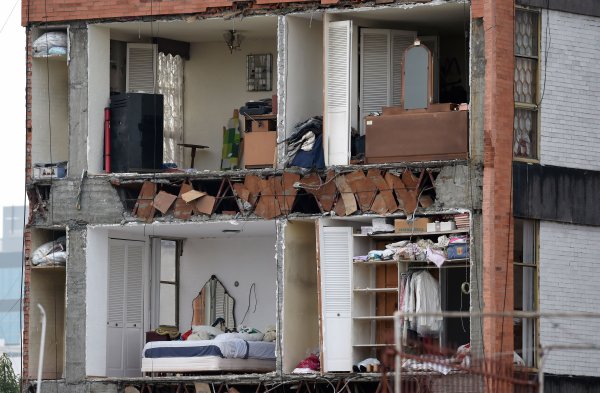 How We Can Stop Earthquakes From Killing People Before They Even Hit
Next Up: Editor's Pick