Here’s how democracy is supposed to work: Citizens go to the polls to choose who will represent them, and when all the seats are filled, the legislative body looks roughly proportional to the makeup of voters. But that’s not what happened in Wisconsin’s 2012 election, when Republicans took more than 60% of the seats in the state assembly despite getting less than half the votes. That outcome–and similar results in five other states that year–occurred largely thanks to computer-driven partisan gerrymandering.

On Oct. 3, the Supreme Court will hear the case of Gill v. Whitford, which could decide whether that redistricting plan was constitutional and by extension whether the practice of partisan gerrymandering should be reined in.

As a political strategy, gerrymandering is hardly new; the term dates back to the 1800s. But critics say increasing polarization of Democrats and Republicans and sophisticated software have made it much worse in recent years.

“It is questionable how much of a democracy we really are if we have manipulated the lines so that people can change their votes but they can’t change who gets elected,” says Ruth Greenwood, senior legal counsel at the Campaign Legal Center, which is representing the people fighting the Wisconsin map. The state argues that the map sticks to traditional districting principles and reflects the natural tendency of political groups to cluster together.

Some states have tried to address partisan gerrymandering by assigning the redrawing process to nonpartisan commissions. More typically, though, in states like Wisconsin, the task falls to the sitting politicians. And that means the majority party controls the process that will be used to fill its own seats.

Both Democrats and Republicans are guilty of using partisan gerrymandering to their advantage. But about 20 years ago, the GOP gained a national edge, and Democrats have struggled to redraw the lines in their favor ever since. The digital age is partly to blame; district lines are drawn with the use of increasingly sophisticated data-analysis and mapping technologies. These days, once a party makes a gerrymandered map, it’s harder than ever for the opposing party to regain control and flip the map in their favor.

Gerrymandered maps have been challenged in court in the past. The maps are usually overturned when the court finds evidence of racial bias. (The 1965 Voting Rights Act protects minority representation.) Evidence of partisan bias is another story. Courts have generally given a pass to this kind of gerrymandering, in part because there has never been a concrete metric to prove that a party went too far in gaining an advantage.

That’s why the Wisconsin case is unprecedented. The Campaign Legal Center is proposing a multistep test to evaluate whether a map is skewed so far as to be unconstitutional. Such a test hasn’t been presented to the Supreme Court before. Part of the test relies on a simple calculation, called the efficiency-gap equation, to determine how easy it is for each party to translate votes into seats. If a state’s efficiency gap is an outlier by historical standards, it would fail that part of the test.

This is not the only test being developed. Political scientists and statisticians are looking at various ways to fight gerrymandering using the same computer-aided analysis that empowered it. Researchers at the University of Illinois at Urbana-Champaign are using computers to create millions of simulations of “reasonably imperfect” legislative maps that can be compared with the ones lawmakers draw up to help determine whether they are gerrymandered. Organizers at Tufts University trained mathematicians at a workshop this summer to serve as expert witnesses on court cases fighting gerrymandering.

If the high court rules against the Wisconsin map, the test could have a nationwide impact starting in 2020, when the next Census kicks off a new round of mapmaking. Nicholas Stephanopoulos, a law professor at the University of Chicago who helped develop the test, says it would not eliminate all gerrymandering but would cut off the most egregious plans.

“There are places where [voters are] 50-50, yet one party is locked out of power,” Stephanopoulos says. “There is no other practice or policy that has such an impact on who is elected.” 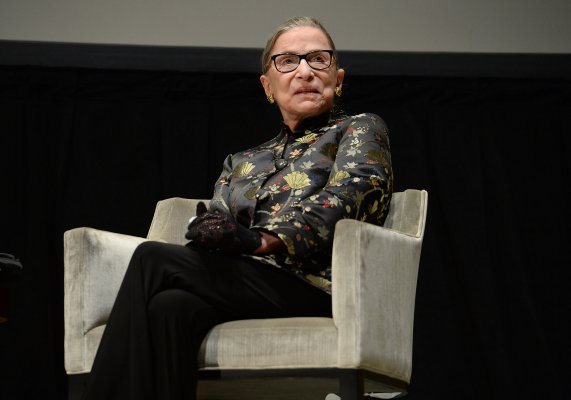 Ruth Bader Ginsburg: Sexism a 'Major Factor' in 2016
Next Up: Editor's Pick