You Asked: What Is Belly Button Lint?

A professor of ecology and radiation studies at Leibniz University in Germany, Steinhauser would love to talk about the important environmental research his team is conducting. But back in 2009, he published a study on the nature of “navel fluff,” which is the technical term for belly button lint. He’s been hounded by curious patients and journalists ever since. “It was a fun study, and I enjoyed the public attention for a while,” he says. But now he’s over it and ready to move on.

Steinhauser’s study captured the public’s attention because it tapped into a very human curiosity. Turns out, navel lint is exactly what you think it is: a collection of stray clothing fibers.

Just as your dryer collects rubbed-off threads and fibers in its lint trap, your belly button can trap small particles that slough off of the clothing you wear. “New clothes especially have some extra or loose fibers, and so you may notice extra navel fluff if you’ve been wearing a new shirt,” says Dr. Rob Danoff, a physician and director of the family medicine practice at Aria-Jefferson Health in Philadelphia.

This also explains why your navel lint may change colors. “I’ve had a patient come in worried because his belly button lint had turned blue, and I told him it was probably from his blue jeans,” he says.

Danoff treats a lot of kids, who ask about belly button lint more than adults do. He’s even collected patients’ navel fluff and sent it to a lab for analysis. Apart from clothing fibers, the analysis turned up dead skin cells and bacteria. “There’s a little ecosystem in your navel, but it seems harmless,” he says.

Research backs him up on that. A 2012 study from a group of U.S. universities found the bacteria in your belly button are “highly diverse” but do not seem associated with risks for infection or other health issues.

If your belly button doesn’t seem to accumulate much lint, there are reasons for that.

Danoff says that “outies,” or shallow belly buttons, are less likely to catch and hold excess fluff. On the other hand, Steinhauser’s study found that men with hairy bellies tend to have a lot more navel lint. That’s because abdominal hair both rubs fibers off of clothing and channels them toward the belly button. “If you have a deep belly button, which is more common if you’re overweight, that can also lead to more navel fluff build-up,” Danoff adds.

The only issues he’s encountered with the stuff stemmed from people trying too hard to dig it out, he says. “If you stick a fingernail in there and really scrape to get the fluff out, that can break the skin and could lead to an infection,” he explains. Some people also clean their belly buttons with cotton swabs soaked in alcohol, which he says can cause dryness and irritation.

You’re better off just holding your belly button open and spraying it with shower water. “Once the fluff builds up enough, you can pull it out easily when you’re in the shower and it gets wet,” he says.

If you’re really worried about your lint—or you’re headed to the beach and concerned someone may notice it—you could also use a wet cotton swab to gently work the lint out. Removing your belly hair could also limit your lint build-up.

“But the stuff is really harmless,” Danoff says. 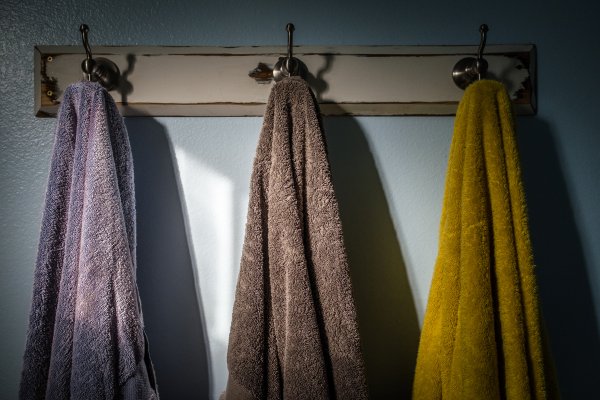 Your Towels Are Way Dirtier Than You Think
Next Up: Editor's Pick