Many conservatives believe that universities and colleges have become illiberal spaces that stifle free speech. They point to the violent protests at the University of California, Berkeley, that prevented Milo Yiannopoulos from speaking, or the threat of protests that led to the cancelation of Ann Coulter’s appearance at the school. With horror, they recall what happened to Charles Murray at Middlebury College and list examples of coddled students protesting the likes of Condoleezza Rice. All of which reflects, they believe, a broader culture on campuses designed to quarantine students from diverse political opinions—to secure them in their “safe spaces” with “trigger warnings” and “political correctness.” No wonder, conservatives claim, that we have a generation of special snowflakes, quick to take offense and even quicker, when challenged, to melt like snow in the hot sun.

I ran smack into this argument on Morning Joe, where I often appear. Joe Scarborough and the panelists took a dumbfounding position, and I was flummoxed in my response. I spend every day on a campus that has plenty of political conservatives. I also know faculty who worry about facing death threats because of something they’ve said or written.

Public universities like the University of Wisconsin, Madison, are suffering under the weight of a conservative legislature and Governor Scott Walker. Lawmakers are passing deeply hypocritical “campus free speech” legislation to curb the right to free speech in the name of protecting conservatives. Even the President of the United States is willing to throw the First Amendment in the trash as he urges NFL owners to fire or suspend players who refuse to stand during the national anthem. The defense of free speech seems to be highly selective, but the idea of universities and colleges as hotbeds of intolerant liberals is just plain wrong.

Thousands of lectures across the ideological spectrum happen on campuses. Students go to classes, participate in various organizations and attend lectures without incident. Imagine how many times Murray or Rice or Ben Shapiro have actually spoken on campuses without it becoming a national spectacle. The protests we have witnessed recently are not the norm, but conservatives and even some liberal columnists would have us believe otherwise.

In many ways, the university setting is the most vibrant space for the free exchange of ideas in this country. That doesn’t mean that universities and colleges are free from the passions of political debate. Just as those passions inflame partisanship in national and local politics, they show up on campuses, especially in the hearts and minds of young people who fight it out, sometimes with abandon. Hopefully in the process, they learn what Princeton president Christopher Eisgruber recently conveyed to the entering class: “The art of disagreement is not only about confrontation, but also about learning. It requires that we defend our views … and, at the same time, consider whether our views might be mistaken.”

But some speakers challenge the basic values that make this learning possible. They use the university’s commitment to the free exchange of ideas to promulgate positions that threaten the fabric of the community as a whole. They spew intolerant and hateful views.

The torch-bearing neo-Nazis shouting “Jews will not replace us” in Charlottesville are just one extreme example. Richard Spencer and Coulter are another. They add little to the debate at universities and colleges. Coulter revels in her ability to insult broadly. Spencer believes white people are superior to black people. How can I reasonably argue with someone who believes he is innately better? It’s as intellectually valid as saying, “Kiss my ass.”

Campuses must resist the rhetorical sleight of hand that claims it is intolerant to disallow intolerant speech, and instead protect the conditions of equal standing and dignity that make for the free exchange of ideas in our communities. It is a delicate balance, but one universities and colleges must achieve.

Not all conservative speech is hateful speech, and we ought to be able to distinguish the difference. Most conservatives aren’t like Yiannopoulos, Spencer and Coulter. Such conservatives should, and do, speak on campuses every day. But if they hold controversial views, like any speaker of whatever ideological bent, they should expect a passionate response that may take the form of protests. And in those cases, students have every right to exercise their freedom of speech.

Some conservatives want to proselytize without pushback. They want to exact judgment without being judged. When others reasonably call them racist or sexist or homophobic, they clutch their pearls and cry foul. One wonders who the real snowflakes in this drama are. 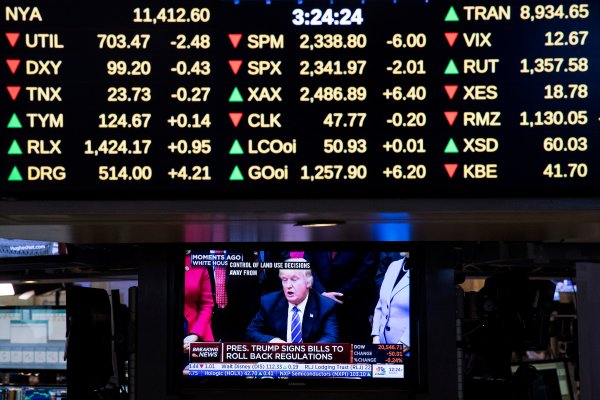 You Shouldn't Care How Stocks React to Donald Trump
Next Up: Editor's Pick