Puerto Rico Is Recovering Much More Slowly Than Texas and Florida. These Satellite Photos Prove It

Nearly a week after Hurricane Maria made landfall in Puerto Rico, the Department of Energy reports that almost all of the island’s 1.57 million residents are still without electricity. Maria, which directly hit the island as a Category 4 hurricane in the early hours of Sept. 20, caused widespread damage to the territory’s aging power grid. By evening, most of the island was in complete darkness.

The blackout is partially due to the island’s aging infrastructure. Its power plants are 44 years old on average, compared with the industry average of 18 years. In a report in April, the Puerto Rico Electric Power Authority — Puerto Rico’s only power supplier — noted that “years of under-investment have led to severe degradation of infrastructure.”

To get a sense for how devastating Puerto Rico’s power situation has become, the following three pairs of images taken by a NOAA satellite compare the before-and-after nighttime imagery of Puerto Rico to that of areas of Florida affected by Hurricane Irma and Texas affected by Hurricane Harvey. The images show that in many parts of Texas and Florida, power was either unaffected or largely restored within several days. While Irma knocked out 59% of all electricity in Florida, all but about 17% of customers saw their power restored five days after the storm. In Puerto Rico, however, almost no power has been restored to the island since Hurricane Maria.

And there’s no sign that it will get better soon. PREPA was still working on restoring power to about 60,000 residents following Hurricane Irma as Maria made landfall. Gov. Ricardo Rosselló told CNN that it could take “months” to fully restore power to the island. PREPA’s financial and political troubles further complicate recovery efforts, since it filed for bankruptcy in July. 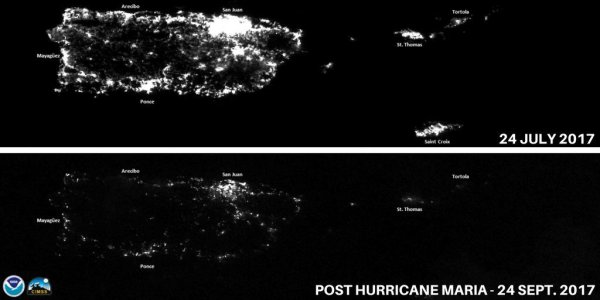 See What Puerto Rico's Blackout Looks Like From Space
Next Up: Editor's Pick