President Trump announced he will travel to Puerto Rico next Tuesday—the earliest he could visit the island territory without impeding the ongoing disaster response efforts. It comes as officials on the ground and lawmakers in Washington are calling for a more robust federal commitment, with the Trump Administration taking fire for a perceived lack of focus on the situation. The White House, though, maintains that it is leading an “unprecedented” response to Hurricane Maria, which has left most of the island without power and caused critical shortages of food, water, and fuel. The Administration is formulating an initial damage assessment to present a request for additional congressional aid funding.

Republicans are set to roll out their “unified framework” for tax reform Wednesday, with Trump traveling to Indiana to make the announcement. The framework is a far cry from the legislative language Trump Administration officials had promised to have ready months ago — and the announcement itself will show that it’s more accurate to refer to it as “tax cuts” over reform.

Showing he sees political upside in his war of words with pro athletes, Trump has continued to comment publicly on the situation — including to assert that his chief of staff, John Kelly, is fully on board with his attacks on those choosing to kneel in protest during the national anthem.

Alabama Republicans are voting on their candidate for the Senate, with Trump backing incumbent Sen. Luther Strange at the behest of Senate Majority Leader Mitch McConnell, and Steve Bannon and other conservative populists backing former judge Roy Moore. The bitterly contested race is already having impact in Washington, with Republicans more worried than ever about primary challenges from their right flank. And should Moore win, as he is favored to do in recent polls, then expect lawmakers’ fears to reach a frenzy — especially with the failure of the latest Obamacare repeal effort and an uncertain future for the tax effort.

The GOP Tax Plan: Tough Choices With Limited Room to Maneuver
Republicans will likely struggle to squeeze all their priorities into a deal that allows for $1.5 trillion in tax cuts [Wall Street Journal]

Trump Has Picked Fights Over the Flag Before. But This Time Was Different.
Trump’s culture warrior past [Washington Post]

“I think if the debate is really, for them, about police brutality, they should probably protest the officers on the field that are protecting them instead of the American flag.” — White House Press Secretary Sarah Sanders Monday

“The NFL has all sorts of rules and regulations. The only way out for them is to set a rule that you can’t kneel during our National Anthem!” — President Trump in a Tuesday tweet

Bannon to Alabama: ‘They think you’re a pack of morons’ [Politico]

John Kelly is not pleased with Trump’s NFL culture war, but ‘appalled’ by players’ lack of respect [CNN]

The ACA repeal effort was bad news from the start, with little public scrutiny and little chance for success [Washington Post] 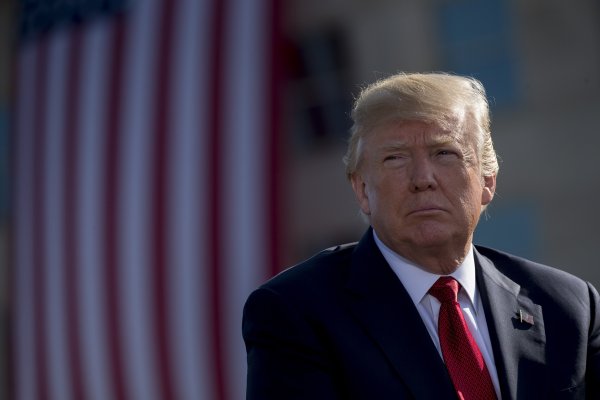