'Cardi B Has Just Made History.' Twitter Reacts to Rapper's Billboard Success

Cardi B’s historic Billboard success has been a cause for celebration on Twitter.

The 24-year-old rapper’s “Bodak Yellow” has topped the Hot 100 chart, knocking Taylor Swift’s “Look What You Made Me Do” from No. 1 after three weeks in the position. But the most important part of Cardi B’s rise is “Bodak Yellow” becoming only the second song by an unaccompanied female rapper to ever top the chart, joining Lauryn Hill’s 1998 track, “Doo Wop (That Thing).” She’s also the first female rapper of color to appear on a Hot 100 No. 1 hit since Lil’ Kim collaborated with P!nk, Mya, and Christina Aguilera for 2001’s “Lady Marmalade.”

On Twitter, many people — including Nicki Minaj and Olympic gold medal gymnast Simone Biles — shared their enthusiasm for Cardi B’s triumphant feat. “Cardi B went #1 with a REAL Hiphop / Rap song! Bodak Yellow is not a Pop Song, or a R&b Song,” wrote one user. “She didn’t need a feature, or a singer on it!” 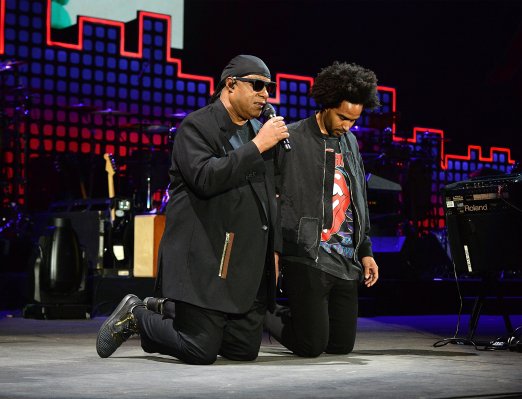 Stevie Wonder Takes a Knee at Global Citizen Festival
Next Up: Editor's Pick