What a Roy Moore Win Could Mean for Washington

On Tuesday, voters in Alabama will choose between two very different political styles: a flame-throwing wild card and an Establishment-backed reliable vote.

But as the Alabama Republican Senate primary draws to a close, the differences between incumbent Sen. Luther Strange and conservative firebrand Roy Moore amount to whether voters are happy with the status quo in Washington, and how they felt about their last governor.

Moore, the twice-ousted former Chief Justice of the state Supreme Court, was in many ways the underdog in the race. Known for his strong feelings on the Ten Commandments—the Washington Post reported the Biblical edicts are on display in at least three places in his home, including over his bed— and fierce opposition to same-sex marriage, Moore was seen more as a disruptor than a viable candidate.

That was until he finished ahead the pack in the Aug. 15 primary, beating Strange by six percentage points.

Though the field has narrowed, anti-Moore ads have flooded the airways, and Trump visited the state for a rally last week, a Real Clear Politics average of polls shows Moore around 10 points ahead of Strange. Given the President’s endorsement, it’d be easy to declare a win for the Bible-thumping Moore as a major loss for Trump, but consultants in Alabama say it’s not that simple.

“I don’t think a vote against Strange has anything to do with voting against Trump,” says David Mowery, a Montgomery-based political consultant. “I think that [voters] just feel like Trump is having to do what he can because of McConnell and because of the national implications.”

The president seemed to suggest that was the case at a rally for Strange last Friday.

“I’ll be honest, I might have made a mistake,” Trump told the crowd. “If Luther doesn’t win, they’re not going to say we picked up 25 points in a very short period of time. They’re going to say, ‘Donald Trump, the President of the United States, was unable to pull his candidate across the line. It is a terrible, terrible moment for Trump. This is total embarrassment.’”

He went on to say that if Strange loss, he would “campaign like hell” for his opponent.

Trump engenders broad support in the state of Alabama, where he beat Democrat Hillary Clinton by nearly 30 points in the 2016 presidential election, and his support for Strange certainly gave the candidate a boost.

But Strange’s connection to both McConnell — who has become a symbol of everything voters dislike about Washington in the race — and former Governor Bentley, who was excoriated when news of the sex scandal that led to his resignation broke, has dampened his support. When Bentley appointed Strange for Sessions’ seat, the then-attorney general was in the midst of investigating the scandal that led to his ouster.

“The first thing you hear anytime the race comes up with someone who is not political is, ‘Oh, well, Strange cut a deal with the governor,’” says John Pudner, the executive director of the Alabama-based conservative action group Take Back Our Republic. “Fair or not, it seems to me that might be the difference in the end.”

With McConnell emerging as persona non grata among some Republicans in the state, a Moore win could mean more instability in a Senate where the GOP is having trouble gaining enough support for what should be easy wins like repealing the Affordable Care Act.

Moore was removed as a judge for failing to remove a Ten Commandments statue and retired early after being suspended for declaring he would not honor the Supreme Court’s ruling on same-sex marriage. If the candidate’s history on the bench is any guide, he could enter the Senate bucking a system already chock-full of system buckers. At the end of the day, though, consultants in the state expect that Moore would vote with Republicans the majority of the time if elected.

Ads from groups like the McConnell allied Senate Leadership Fund, the National Rifle Association and the U.S. Chamber of Commerce have sought to increase support for Strange by blasting Moore in the lead-up to the race. Politico estimates Moore faced a five-to-one ad spending deficit through Sunday. Yet despite that gap, support from national groups has boosted Moore’s argument that Strange will kowtow to Washington bigwigs. Moore also boasts the support of former White House strategist Steve Bannon, former White House advisor Sebastian Gorka and former Alaska Gov. Sarah Palin.

Aside from causing a stir in Washington, a win for Moore could be viewed as having widespread implications for the 2018-midterm elections. If firebrand candidates enter into races across the U.S., Senate Leadership Fund president Steven Law told Politico, attention that should be drawn toward battles with Democrats would be spent on fights with other Republicans.

Brent Buchanan, a Montgomery-based strategist and president of the communication and research firm Cygnal, says the Alabama primary won’t easily translate to other contests. Moore, he says, is not the average Republican challenger — he is a well-known conservative figure in the state whose positions just happen to align with that of the electorate.

“Any Senate candidate that’s looking at running against an incumbent Republican Senator and they’re looking at this race as their barometer, that’s going to be a mistaken strategy on their part,” he says. “ “Kind of like how we’re never going to see another Donald Trump in a presidential race — it’s the same thing with Roy Moore.” 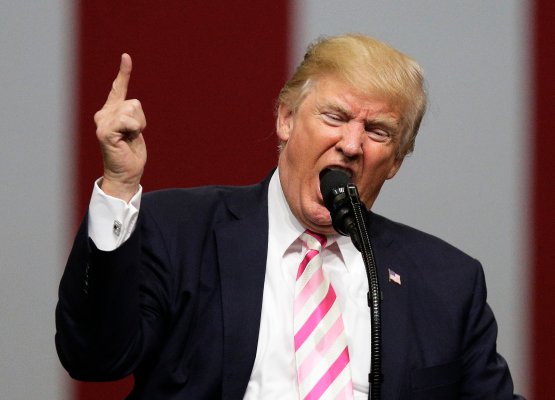 President Trump Slams NFL After Players Kneel During National Anthem: ‘It Is About Respect’
Next Up: Editor's Pick