'Those Kids Have Every Right to Protest.' 97-Year-Old WWII Vet Kneels to Support NFL Players

A 97-year-old World War II veteran is being widely praised on social media after a photo of him taking a knee in support of protesting NFL players was shared and liked by hundreds of thousands of people.

Brennan Gilmore tweeted the photo of his grandfather, John Middlemas, kneeling on the dirt Sunday morning, wearing a crisp blue-and-white button down shirt, long khakis and his World War II veteran’s cap. Gilmore said Middlemas, who is now a farmer in Missouri, “wanted to join” with the athletes who have been kneeling during the national anthem in an apparent act of protest after President Donald Trump criticized players who kneel.

Middlemas told the Springfield News-Leader he hoped the photo would convey a message of peace and acceptance throughout the “whole world.”

“I wanted to communicate what I always told to my grandkids and everybody else,” he said. “When they’d go to bed at night, we’d tell the kids we wanted to be like Jesus.”

“I’m trying to say that you have to love everybody,” Middlemas added. “We don’t kill people. We want to make people live.”

More than 200 NFL players kneeled or sat down while the national anthem played during Sunday’s football games, according to the Associated Press. Two days before the games, Trump lashed out at NFL owners and players over the kneeling movement. “Wouldn’t you love to see one of these NFL owners, when somebody disrespects our flag, to say, ‘Get that son of a bitch off the field right now, out, he’s fired. He’s fired!” Trump said at a Friday rally in Alabama.

Middlemas, who has previously marched for civil rights, told the News-Leader he thought Trump was “garbage-mouthed.” 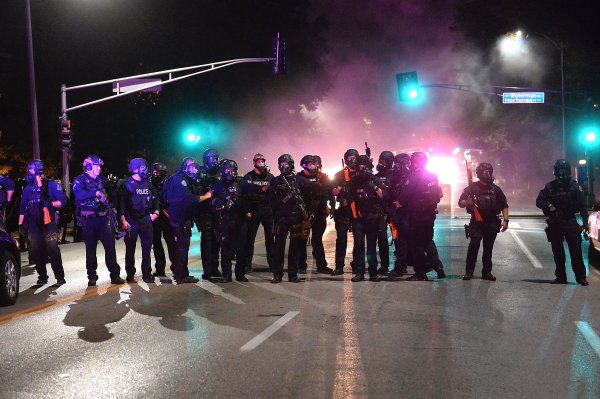