Renowned NASCAR driver Dale Earnhardt Jr. declared his support for peaceful protesters in a tweet Monday hours after an unprecedented show of solidarity among NFL players who knelt and linked arms in response to President Trump’s criticism of national anthem protests.

Earnhardt’s tweet, which garnered more than 123,000 likes, was a quote from former President John F. Kennedy about the dangers of limiting peaceful protests.

His tweet comes after Trump spent the weekend attacking players who took a knee during national anthems — a move the president said should get the players fired. Trump’s comments — which referred to former San Francisco 49ers quarterback Colin Kaepernick, who was the first player to take a knee during the national anthem to protest racial inequality and police brutality — set off a flurry of reaction and protests in the NFL and across the sports world.

Earnhardt’s tweet on the kneeling movement marks a split from the stance of NASCAR officials, who have said they don’t want anyone in their organization to protest. No one appeared to protest during Sunday’s NASCAR Cup series.

NASCAR released a statement Monday afternoon following Earnhardt’s tweet. “Sports are a unifying influence in our society, bringing people of differing backgrounds and beliefs together. Our respect for the national anthem has always been a hallmark of our pre-race events. Thanks to the sacrifices of many, we live in a country of unparalleled freedoms and countless liberties, including the right to peacefully express one’s opinion.”

But several NASCAR team owners have sided with Trump, who said kneeling and not standing during the national anthem shows disrespect for the U.S. flag, the anthem and the country, although Kaepernick and the protesters who have followed him in kneeling have said they are railing against systemic racism in the U.S.

Richard Childress, a former NASCAR driver and now a team owner, told the Associated Press that protesting will “get you a ride on a Greyhound bus.” Childress told his team that “anybody that works for me should respect the country we live in. So many people gave their lives for it. This is America.”

Former NASCAR driver and current team owner Richard Petty said he would fire anyone on his team who protested. “Anybody that don’t stand up for the anthem oughta be out of the country. Period,” he said. “What got ’em where they’re at? The United States.”

Trump on Monday tweeted thanks at NASCAR for its support. 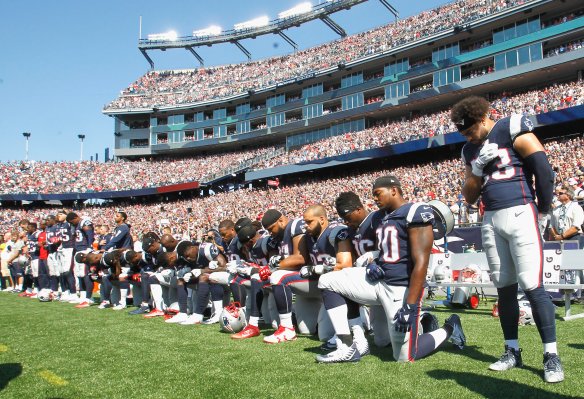 Here's How Standing for the National Anthem Became Part of U.S. Sports Tradition
Next Up: Editor's Pick