This Photo of MLK Kneeling Has New Power Amid the NFL Protests. Here’s the Story Behind It

Dr. Martin Luther King Jr., center, leads a group of civil rights workers and Selma black people in prayer on Feb. 1, 1965 in Selma, Alabama after they were arrested on charges of parading without a permit. More than 250 persons were arrested as they marched to the Dallas County courthouse as part of a voter registration drive.
BH—AP Photo
By Maya Rhodan

A photo of the Rev. Martin Luther King Jr. and other marchers for civil rights kneeling in prayer Selma, Alabama has gone viral in the wake of President Donald Trump’s ongoing criticism of professional athletes who kneel in protest during the National Anthem.

The image, taken in 1965, shows King leading a prayer after a group of protesters were arrested during a march to the Dallas County Alabama courthouse. Around 250 people were arrested during the demonstration, which was part of a push to get African Americans in Selma registered to vote. Among those praying with King is Ralph Abernathy, a fellow minister and leader of the Civil Rights movement.

The photo been shared by both the Martin Luther King, Jr. Center for Nonviolent Social Change and the civil rights leader’s youngest child, Bernice King, on social media.

The sports world’s kneeling controversy began last year, when former San Francisco 49ers quarterback Colin Kaepernick took a knee as the National Anthem was played before football games in protest of the unequal treatment that people of color face in the U.S.

“I am not going to stand up to show pride in a flag for a country that oppresses black people and people of color,” Kaepernick told NFL Media last August.

Since then, other players across the National Football League have taken to sitting out the national anthem as well. That act of civil disobedience has drawn the ire of many, including President Donald Trump, who argue the players are disrespecting the American flag and the men and women who serve in the U.S. military.

“Wouldn’t you love to see one of these NFL owners, when somebody disrespects our flag, to say, ‘Get that son of a bitch off the field right now, out,'” Trump said at a political rally on Friday. “He’s fired. He’s fired!”

Those who support the protests, including the younger King, who serves as the Chief Executive Officer of the King Center, say the root issue is the fact that people of color are still fighting for equal treatment under the law. 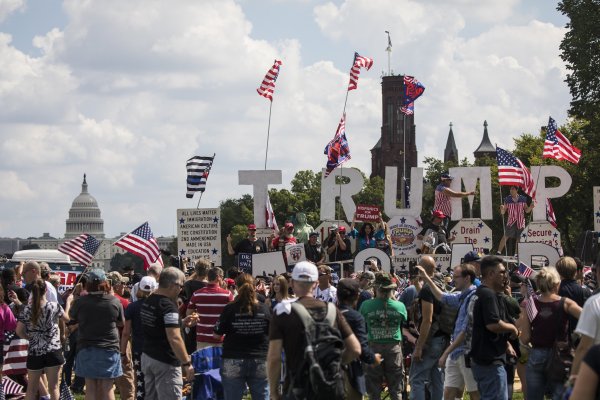