President Trump Added Three New Countries to His Travel Ban. Here's What to Know About Them

The new travel ban, which will take effect on Oct. 18, will continue to impact citizens of Iran, Libya, Somalia, Yemen and Syria but will now also include travelers from Chad, North Korea and certain individuals from Venezuela.

“Making America Safe is my number one priority. We will not admit those into our country we cannot safely vet,” Trump tweeted late Sunday.

The new restrictions vary from country to country and range from a blanket ban on immigrant visas to more targeted sanctions. Existing valid visas would not be revoked by the new ban, and it could be “subject to categorical exceptions and case by-case waivers,” according to the order.

Trump’s announcement came the same day as a 90-day ban on travelers from six Muslim-majority nations was set to expire. Under the new rules, citizens from Sudan will no longer be subject to travel restrictions.

Advocacy groups say the latest changes are little more than window-dressing ahead of a Supreme Court review of the original travel ban, now set for October.

“The administration is once again making cosmetic adjustments to the Muslim ban in hopes that it will pass the barest possible definition of anything else,” Johnathan Smith, legal director of legal advocacy group Muslim Advocates, said in a statement. “The vast majority of the executive order is completely unchanged.”

Here’s what to know about the new countries added to the travel ban.

According to the Trump administration, Chad is “an important and valuable counterterrorism partner of the United States,” and has “shown willingness” to make improvements in immigration and border management.

But Trump’s proclamation states that the West African nation “does not adequately share public-safety and terrorism-related information.” The order also cites terrorist elements active within Chad or in the surrounding region, such as Boko Haram, ISIS, and al-Qaeda in the Islamic Maghreb (AQIM).

Under Trump’s latest directive, citizens of Chad will be barred from entering the U.S. as immigrants and will not be granted tourist or business visas.

Tensions between North Korea and the U.S. have peaked in recent months, following Pyongyang’s missile and nuclear tests and the escalation of a war of words between the U.S. President and Kim Jong Un. In a speech to the U.N. General Assembly on Tuesday, Trump threatened to “totally destroy” North Korea if provoked. In retort, Kim called Trump “deranged” and a “dotard.”

The Trump administration stated that Pyongyang “does not cooperate with the United States Government in any respect and fails to satisfy all information-sharing requirements.” As a result, all North Koreans will be blocked from entering the U.S. under the new travel ban.

The Trump administration said Venezuela’s government was “uncooperative in verifying whether its citizens pose national security or public-safety threats,” and failed to share anti-terror information. Trump also stated that Venezuela was not fully cooperating with deportations of its citizens from the U.S.

The new travel ban targets government officials “who are responsible for the identified inadequacies,” barring officials from five Venezuelan security agencies and their families from entering the U.S. on business and tourist visas. The U.S. has already imposed sanctions on certain senior Venezuelan government figures in response to the President’s recent attempts to hold onto power, reports the Associated Press.

What else has changed?

Iranian nationals will only be allowed to enter the U.S. using valid student and exchange visitor visas, but such visitors will have to undergo “enhanced screening and vetting requirements.”

Sudan’s removal was not explicitly addressed by Trump or the White House in the proclamation. But according to both the Washington Post and the New York Times, the administration found that the African country has met security standards in its latest review. 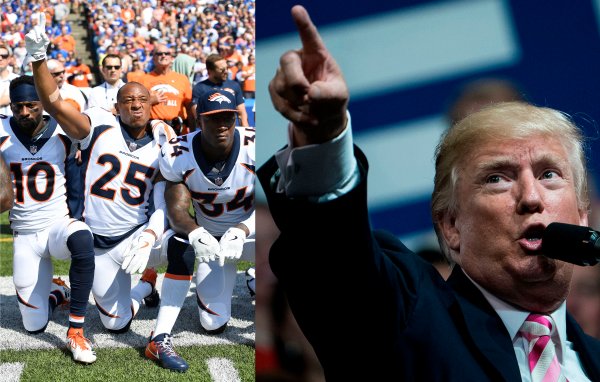 Trump Takes On NFL Anthem Protesters
Next Up: Editor's Pick