Kirkuk's provincial governor Najim al-Din Karim third from right, who was recently sacked by the Iraqi parliament, attends a rally in support of the upcoming independence referendum in Kirkuk on Sept. 19, 2017
Marwan Ibrahim—AFP/Getty Images
By Rebecca Collard / Kirkuk, Iraq

For decades, even a census has been considered too risky in the hotly contested northern Iraqi city of Kirkuk, claimed by Kurds, Arabs and the Turkmen ethnic group. But on Monday, the city’s residents will join people across northern Iraq in a vote on Kurdish independence.

Kirkuk is the most significant of Iraq’s disputed territories under de facto Kurdish control that will vote in the controversial referendum Sept. 25. After a century of Kurds pushing for independence, Massoud Barzani, president of the Kurds’ semi-autonomous region has promised his people the chance to vote on their future. The governments in Baghdad and in Washington have urged the Kurdish leadership to postpone or cancel the vote, seeing it as a divisive distraction from the fight against ISIS.

But for some non-Kurdish residents of Kirkuk and other disputed areas, the referendum is seen as a provocation and an attempt by Kurds to assert power in contested territory. Experts fear the vote could lead to unrest and even violence.

“This is a very dangerous move,” says Kamal Chomani, a nonresident fellow at the Tahrir Institute for Middle East Policy. “If the referendum is held there will be violence between the ethnic groups of Kirkuk.”

The contention here is not just about Kurdish self-rule, it is about what happens to the tens of thousands of Arab and Turkmen residents of Kirkuk under Kurdish rule. Arab residents already seemed hesitant to discuss the referendum this week, many refusing to say if they will even vote, but Turkmen leaders have been more outspoken.

“We won’t allow Kirkuk to be part of Kurdistan,” says Ali Mehdi Sadiq, who is with the Iraqi Turkmen Front and member of the Kirkuk Provincial council. Sitting in his central Kirkuk office behind tall cement blast walls guarded by armed men, Saddiq says the Turkmen will take up arms to stop the Kurds from annexing the city. Earlier this week, clashes outside another Turkmen party office left at least one person dead. “We will fight to the last Turkman,” Sadiq says.

Posters encouraging people to vote in the upcoming independence referendum are seen in central Kirkuk on Sept. 21, 2017.
Marwan Ibrahim—AFP/Getty Images

Similarly, the city’s mostly Sunni Arabs worry what will happen if the Kurds declare independence. “There are no guarantees of rights for Arabs if Kirkuk gets attached to Kurdistan. The only thing they mention is the rights of the Kurds and the Turkmen,” Ramla Al-Obaidi, an Arab member of the Kirkuk provincial council. “This will lead to more marginalization and neglect of the Arabs in Kurdistan.”

The Kurdish forces took control of Kirkuk in 2014 without firing a single bullet. As the Islamic State of Iraq and Syria (ISIS) advanced the Iraqi army crumbled and thousands of troops fled their posts in Iraq, including in Kirkuk. The Kurdish region’s military forces — known as the Peshmerga — walked in, taking control of the long-contested city and millions of dollars of arms.

Many Kurds cite the Iraqi forces’ desertion as a reason why the Peshmerga fighters can’t give back the city. The Iraqi army, they say, is unable or unwilling to protect them or Kirkuk.

Kurdish flags now fly over the checkpoints at the entrance to the city and a 20-meter statue of a Peshmerga fighter, made from cement and iron, guards the main road from Erbil. The Kurds says it a sign of appreciation for the Kurdish fighters protecting the people of the area from ISIS, but it feels like a reminder of who is in charge here.

“The Peshmerga will definitely not leave Kirkuk even if they sacrifice their lives for the city,” says Hawer Ali, who was serving in the Iraqi army in 2014 and has now joined the Peshmerga. Some fear the mostly-Shia militia of the Popular Mobilization Units, having grown in power and influence during the fight against ISIS, could enter Kirkuk in support of the government, and clash with the Peshmerga.

Ali, like many Kurds, has historic reasons for wanting an independent state. The regime of Saddam Hussein began pushing Kurds out of Kirkuk in the mid-1970s as part of a campaign of Arabization across mixed areas of northern Iraq. Tens of thousands of Kurds were evicted and Arabs from other parts of the country were brought to settle here, changing the demographics in a bid to cement Arab control of the oil-rich city. Ali was just one year old when his family was pushed from Kirkuk.

During the U.S. invasion of 2003, the Kurdish Peshmerga fought alongside American troops and took control of Kirkuk. Ali’s family returned to the city that same year. “All the Kurds came back,” says Ali. The Kurds soon gave control back to the national government but in the almost 15 years since, hundreds of thousands of Kurds have returned to Kirkuk, many lured by free land and homes courtesy of Kurdish political parties.

Ali acknowledges the referendum is increasing tensions in his city, but he says it’s necessary for what is to come. “I don’t think there is any country that declared independence without paying for it,” says Ali. “And we are ready to pay for it. We are ready to sacrifice.” 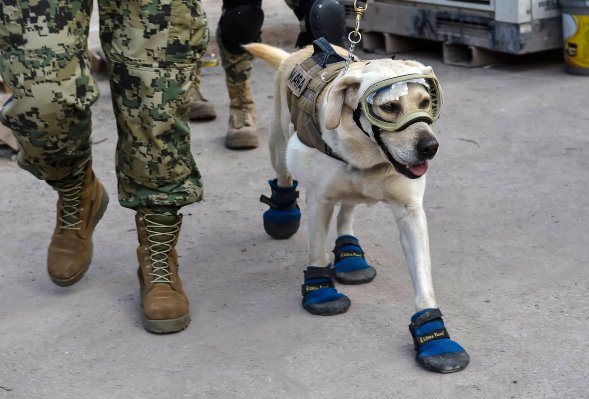 Meet Frida the Mexican Rescue Dog Who Is Saving Lives
Next Up: Editor's Pick