His Mexico City Apartment Block Was Built Only Months Ago. So Why Did It Collapse So Easily?

In April, Luis Resendiz was ecstatic to move into his brand new apartment in a sleek block with solar panels in a middle class neighborhood of Mexico City.

The 35-year-old photographer had paid 2.2 million pesos ($125,000) for the property, a significant amount in a country with a daily minimum wage of $4. But through hard work and with the help of a hefty bank loan, he made what he thought was a worthwhile life investment. Then on Tuesday, he heard via Whatsapp that his home had been flattened by the factor 7.1 earthquake that killed at least 295 people on Sept. 19. His life was saved by the fact he was away working, but two maids who were in the block of 24 apartments died under the debris.

The earthquake was powerful, but Resendiz assumed a building only completed a few months ago would have been built using modern construction techniques designed to sustain even more severe seismic shocks. “How is it possible that it is not even a year old and it’s gone?” he asked, standing by the pile of rubble that used to be his apartment. “And you see the other buildings that are right next to it and they are still standing, no damages, no scars, no nothing. How can that pass?”

Even as Mexico City and nearby states continue to deal with aftershocks from Tuesday’s quake, residents like Resendiz are raising questions about the buildings that collapsed and whether some of the death and destruction might have been avoided. Following another tremor here on the same day in 1985, the government issued tough regulations to help make new buildings quake-proof, including making the foundations with a stronger mix of cement, and making stronger walls and column. But there are suspicions some unscrupulous builders may have ducked on these rules with the help of corrupt officials.

The earthquake on Tuesday damaged over 3,000 buildings in Mexico City, the government has said; many have only superficial damage but dozens collapsed completely, and many more have structural cracks and need to be demolished. Thousands of families are staying with friends or in shelters, scared to go back in case their homes tumble down on them in the night.

Rescue workers and volunteers search for survivors on a collapsed building the Del Valle neighborhood in Mexico City on Sept. 19, 2017.
Miguel Tovar—AP

Most of the buildings that fell appear to have been built before the 1985 earthquake and the new rules. But others were more recent, including the apartment block where Resendiz lived in the southern Portales neighborhood, which only opened its doors in January.

Hector Cortes is an architectural engineer who has supervised the building of apartments around the city since the 1970s, and says all of them survived both earthquakes. The post-1985 regulations are sound, he says, but they need to be obeyed more stringently. “The rules are made for an area that is of high risk of tremors. If you follow them, then a construction should not be in danger. But some builders want to save money by using weaker cement, or making thinner walls.”

Mexico’s capital has seen a boom in building in recent years, with one real estate firm predicting house prices would go up another 7 percent in 2017 alone. There has been a particular surge in construction in trendy neighborhoods to the south of the city center, which are on softer ground over an old lake bed and were hard hit by the quake. “The problem is corruption, officials taking bribes to give the green light on bad building,” says political scientist Lorenzo Meyer. “As an architect friend says, ‘Natural disasters don’t exist. They are socially constructed.’ ”

Shortly after the quake, the construction company that sold Resendiz the apartment contacted him to insist the building was well-constructed and to deny responsibility for the collapse, he says. However, he and other former residents are talking to a lawyer about taking the case to the courts. It can be difficult to sue a bad builder in Mexico’s troubled legal system, but the public awareness of the case could make judges more sympathetic. “We don’t want anybody in jail. We just want our money back,” Resendiz said.

Many of the residents had no private insurance for their apartments. Others are worried that insurance companies could refuse to pay citing bad building methods. Several architects have come to the building since the earthquake and concluded it was not well built, Resendiz said. The post-1985 building rules apply across the city, but Portales has particularly soft ground. Nobody at the construction company was available to comment, and TIME has chosen not to publish its name with potential legal action pending.

Resendiz is currently back living with his mother as he tries to deal with the legal situation and keep earning a living. But he says there are others in worse situations. “I am happy that I am alive. I have a job. I have my family, my friends who helped me out. I am not in the hospital fighting for my life. I can smile, I can do everything. I can start over again.” 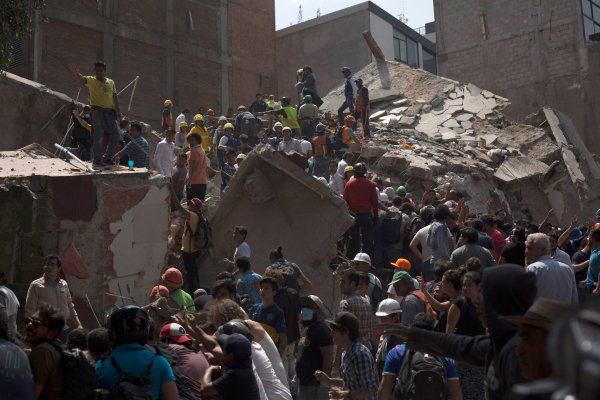 225 Killed As Earthquake Rocks Mexico City
Next Up: Editor's Pick