U.S. Secretary of Education Betsy DeVos testifies during a hearing before the Labor, Health and Human Services, Education and Related Agencies Subcommittee of the House Appropriations Committee on May 24, 2017, on Capitol Hill in Washington, DC.
Alex Wong—Getty Images
By Tessa Berenson

“Today, Betsy DeVos and the Trump Administration chose to tip the scales in favor of rapists and perpetrators,” the group End Rape on Campus said in a statement. “Rolling back this guidance is an affront to the students, survivors, and allies who have fought to bring the sexual assault epidemic out of the shadows.”

One key change in the new interim guidance is that now schools are directed to choose which standard of evidence to use in investigating sexual assault cases.

The interim guidance “will discourage students from reporting assaults, create uncertainty for schools on how to follow the law, and make campuses less safe,” Fatima Goss Graves, president and CEO of the National Women’s Law Center, said in a statement. “This misguided directive is a huge step back to a time when sexual assault was a secret that was swept under the rug.”

Groups that represent people who have been accused of sexual assault, however, some of which met with DeVos in July, welcomed the changes.

Cynthia Garrett, co-president of Families Advocating for Campus Equality, a nonprofit founded by mothers of sons who were falsely accused of sexual misconduct in college, listed seven aspects of the new guidance that she found especially important, including that schools can now choose to resolve these issues through mediation, which allows both parties to reach a voluntary resolution.

“Parties in the grey ‘he said/she said’ cases might benefit significantly from an understanding of each other’s perspectives concerning the event in question,” Garett told TIME in an email, “as well as their own shortcomings in communicating their own or tuning in to their partner’s wants and needs.”

Michelle Owens, spokeswoman for Stop Abusive and Violent Environments (SAVE), a nonprofit group that advocates for the due process rights of those accused of sexual assault, told the Detroit Free Press that the new interim guidance is a “really good start.” 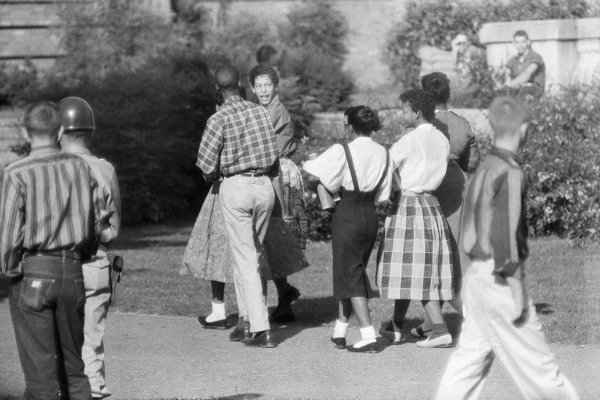 'I Had a Right to Be at Central': Remembering Little Rock's Integration Battle
Next Up: Editor's Pick