Former UN Secretary General Dag Hammarskjold once remarked that the UN “was created not to lead mankind to heaven but to save humanity from hell.” Put another (less poetic) way, the UN is better at helping the world cope with crises than at preventing or ending them. This week’s UN General Assembly has confirmed as much; here, five global challenges the UN can, and can’t solve:

Let’s begin with something the UN can do very little to resolve: the North Korea standoff.

There are three reasons for that. First, the “carrot” the UN wields—the lifting of economic sanctions—holds little appeal for a regime that depends on isolation for political stability. Second, the principal players—the U.S., China, and South Korea—have their own, often conflicting concerns when it comes to dealing with the Kim regime. The UN can help the world arrive at a lowest common denominator solution, but only when that denominator exists. It doesn’t in this case, because these three countries can’t agree on an acceptable post-Kim outcome.

Third, Kim Jong-un has a particular fear of being toppled by a U.S.-backed regime change—and that was before Donald Trump threatened to “totally destroy” North Korea in front of the entire General Assembly this week. He believes that nuclear weapons are his only sure defense against that. He won’t negotiate them away, and there’s nothing the UN can do about that.

At least the UN will be ready to help if the North Korean conflict turns deadly. The UN plays a critical positive role in the management of humanitarian crises—as the Rohingya crisis has begun to grab international headlines, the UN released $7 million from its emergency relief fund to help hundreds of thousands of Rohingya Muslims access food, shelter and health care as they flee violence in Myanmar.

This kind of help is more essential than ever. Some 65.6 million people were displaced around the world at the end of 2016, the highest number recorded since World War II. Of those, 22.5 million are refugees, who look to the UN for basics like shelter, food and water. Just as important is the fact that the UN sticks around long after the news cameras move on. The UN High Commissioner for Refugees (UNHCR) is currently assisting 12 countries that are hosting more than 300,000 refugees: Cameroon, Chad, DRC, Ethiopia, Iran, Jordan, Kenya, Lebanon, Pakistan, Sudan, Turkey and Uganda. The UN doesn’t get the public credit it deserves for its humanitarian work, even during UNGA week.

The UN may not be able to help with North Korea, but it still has a role to play in the Iran nuclear deal.

Iran’s supreme leader agreed to the deal because, unlike Kim Jong-un, he believed his country would be better off if it escaped economic isolation. Iran has one of the best-educated populations in the Middle East, but its potential has been limited by international sanctions that between 2012-2014 cost Tehran 4.5 percent of its GDP, according to the World Bank. And while the lifting of sanctions under the deal hasn’t yet produced the economic windfall Tehran hoped, it has provided enough to keep Tehran from restarting its nuclear program. For most of the world, that counts as a win.

Not for Trump. The U.S. president called the deal “an embarrassment to the United States” in his keynote speech. But the UN can prove crucial to keeping the deal intact. If the U.S. pulls out of the Iran nuclear deal — as Trump has threatened on multiple occasions — but the rest of the Security Council and UN community remain on board, Iran is most likely to stick to the deal as well, with the added bonus of getting to paint the U.S. as the villain.

The other thing that gets short-changed at UNGA week? The UN’s ability to help people build (or rebuild) their lives over the long-term. Governments tend to focus on problems that can be tackled in the short term. But some of humanity’s greatest accomplishments are decades in the making, with UN institutions playing prominent roles.

The World Health Organization, a specialized agency of the UN, led the charge in the eradication of smallpox; UNICEF, the UN division focused on child welfare, says it has helped save the lives of more than 90 million children since 1990. Over the last two and a half decades, the UN has assisted in efforts to help more than 1 billion escape extreme poverty, 2.1 billion people access improved sanitation facilities, and 2.6 billion people access improved sources of drinking water. These accomplishments matter for billions of people, and who else is willing and able to accept these responsibilities?

Still, the UN is much less effective at solving large problems outright. And few problems are larger than the threat of climate change.

Since 1880, global temperature has risen an average of 1.7°F; the scientific consensus is that climate change becomes catastrophic and irreversible at an increase of 3.6°F degrees (or 2° C). Global warming began to concern scientists around the middle of the 20th century, but it was not until the 1980s that the UN really began addressing the issue in earnest, leading eventually to the Kyoto Protocols in the 1990s. Kyoto imposed emissions caps on developed countries like the U.S. but let developing countries like China continue business as usual. The U.S. declined to ratify the treaty, and global temperatures continued to rise.

In theory, global warming is the ideal challenge for the UN to tackle. Global problems require global solutions, after all. But addressing global warming will require sacrifice at the individual country level. That doesn’t play well in domestic politics; and while the recent blowback to Trump’s withdrawal from the Paris Accords suggests that popular opinion may be changing on that front (hence his waffling on the issue this week), it’s not changing fast enough. We will pass the 2°C degree threshold; uncomfortable as it may be, we need to start preparing for that reality. Thankfully, we’ll have the UN to help us deal with the fallout. 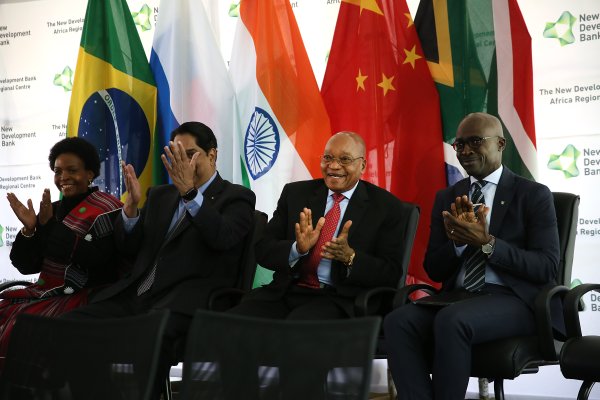 The Mixed Fortunes of the BRICS Countries, in 5 Facts
Next Up: Editor's Pick