What I Learned About Leadership from Leading Leaders

Yet when I was a kid, people told me that I needed to be more of a leader because I was smart. This made little sense to me, since none of the adults who led were smart. It’s not like when my vice principal talked, I thought, This guy is better at math than anyone else in this building. No, I thought, This guy is damn good at yelling at kids.

Still, if you want to make more money, bosses say you have to lead. So I reached out to Jocko Willink, who led SEAL task unit Bruiser and co-wrote the book Extreme Ownership: How U.S. Navy SEALs Lead and Win. None of the words in Willink’s bio appeal to me besides book. After we talked on the phone a bit, Willink said he had hope for me. “The fact that you say ‘I don’t know if I’d be a good leader’ is a good start,” he said. “The person who says ‘I know I’m a great leader’ can be a great leader, but there are a lot of people who think they’re good leaders and they’re not.” Good leadership, I learned, involves very complex logic statements.

I also learned that there are tricks that could improve my leadership, like being named Jocko Willink instead of Joel Stein. Willink suggested that I needed to work on my leadership voice just like I honed my writing voice. And that voice needed to be much louder, more confident and concise, while delivering simpler ideas. “The law of combat No. 2, which I had come up with after I came back from the Battle of Ramadi, is you have to keep things simple,” he told me. My law of combat No. 2, which I came up with after the battle with my lovely wife Cassandra, is to never use the B word.

I figured I could make Willink’s adjustments and become a leader among men until I remembered that I can’t even get my son’s 8-year-old friends to listen to me, and often resort to phrases such as “Really, guys, I’m serious.” Hearing this, Willink struck at my core: “Maybe you’re not that loud, maybe you’re not that charismatic. Maybe you don’t feel confident that you have a plan that the kids will like.” Of course I don’t. No one has a plan kids like. Yet Willink told me that when he was recently with kids at a pool, he lined them up to dive and later critiqued them: “I said, ‘Your presentation was marginal! I’m going to give you a 3.4! Get out of the water!'” He also gave them nicknames, such as Monkey Brain, Squirrel Face and Mosquito Head. Willink could be the vice principal of America.

Going to war with children seemed like an unrealistic goal, so I turned to John C. Maxwell, who has sold a million copies each of the books The 21 Irrefutable Laws of Leadership, Developing the Leader Within You and The 21 Indispensable Qualities of a Leader. “You’re leading, big time,” Maxwell told me. “When people read your articles, you influence them.” I asked him what I could do to be an even better leader, and he told me that my question itself was leadership. “Whoever asks the questions does the leading, because they set the context. You led me all the way.” This was amazing. I desperately wanted to ask Maxwell if I was good in bed.

He did say I could improve my leadership by being more intentional in my influence. He told me a story about his 16-year-old granddaughter telling him to grab a certain parking spot near a Canada Day parade. But he held out for a better spot–and got one. Then he sat with her on a bench for 10 minutes. “I said, ‘All your life, there are going to be people telling you there are no parking places up front. You go to the front. I don’t always get a close parking place, but I get them more often than other people do.’ I don’t think she’ll ever forget that,” he told me. If I know anything about 16-year-old girls, I’m pretty sure she’s never going to forget how badly she wanted to leave that bench.

Now that I realize that I’m leading you, I want to intentionally influence you in my loud voice: Don’t become a leader like me! Too many people are trying to make too much change right now. For at least a little while, let’s teach our kids followership. 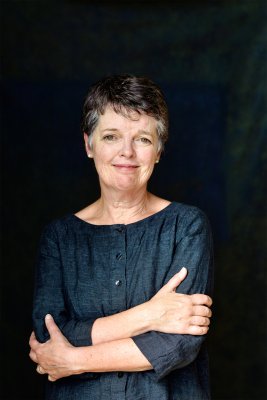 Review: Grace and Gumption in Alice McDermott's The Ninth Hour
Next Up: Editor's Pick