In a Quantum Leap, Star Trek Becomes a Female Enterprise

Yeoh and Martin-Green kick off the new Star Trek with an action-packed episode on Sept. 24
Jan Thijs—CBS
By Eliana Dockterman

When CBS announced two years ago that it would bring Star Trek back to television, this time starring two women of color, you could have been forgiven for thinking the trolls might stay under their bridges for once. Even if they turned out in droves to protest the casting of Daisy Ridley as the lead of the new Star Wars and harassed the stars of the all-female Ghostbusters remake, surely Trekkers–fans prefer that term to Trekkies–would be different. After all, when it first aired in the 1960s, Star Trek boasted one of the most diverse casts on TV, and in 1968 it broadcast the first interracial kiss. Across its many iterations, the 51-year-old series consistently promoted postracial alien harmony and a top-line promise to “boldly go.”

If only. When CBS revealed that Sonequa Martin-Green (The Walking Dead) and Michelle Yeoh (Crouching Tiger, Hidden Dragon) would headline the new Star Trek: Discovery, the two women were greeted with the kind of abuse that has become commonplace in social media. Earlier this year, Martin-Green decided to address the blowback at San Diego Comic-Con–a 130,000-person pop-culture convention that can trace its origins to Star Trek fan gatherings in the early 1970s. Martin-Green, Trek‘s first African-American female lead, says she wasn’t surprised by the fracas: “I’m a black woman raised in the South, so that’s something that I have always had an unfortunate understanding of. But on the flip side, it was surprising, because to say that you love Star Trek but you’re upset about diversity on the show is completely antithetical.” So she encouraged fans to remember the show’s long history.

The last Star Trek television series ended in 2005. Writer Bryan Fuller, who worked on Star Trek shows Deep Space Nine and Voyager before he created Hannibal for NBC, began lobbying for a new Star Trek starring a black woman. Martin Luther King Jr. once told Nichelle Nichols, who played communications officer Uhura and who was the one to lock lips with William Shatner’s Kirk for that groundbreaking kiss, that she was an inspiration to him. Imagine if Nichols had gotten to play the lead, Fuller argued. CBS eventually greenlighted his idea for a Star Trek prequel set 10 years before the original. The show will premiere on its broadcast network on Sept. 24, but will then move to CBS All Access, a subscription streaming site, in a bid to take on the likes of Hulu and Netflix.

Transferring the show to the web is just one of many tweaks CBS is making to the Star Trek formula. Discovery traces plot arcs and character development over several episodes rather than adhering to the monster-of-the-week structure of the original. Martin-Green stars as Michael Burnham, a human orphan who is taken in by Vulcan-human couple Sarek and Amanda. (Fans will recognize them as the biological parents of Spock; as for Michael’s name, Fuller has long made a practice of giving his female leads male monikers, with this one a nod to the archangel Michael.) She grows up suppressing her human emotions in order to assimilate into the hyper-logical Vulcan society. In hopes of helping her connect to her human roots, Sarek asks Captain Philippa Georgiou (Yeoh) to take Michael under her wing and teach her to engage with her emotions.

The series begins with the two women leading the ship Shenzhou before certain spoilery events send Martin-Green’s character on an adventure aboard another ship, the U.S.S. Discovery. The writers say the characters’ mentor-mentee dynamic will be more realistic than most female relationships on television. “People always think you put two women in the same place and they compete with each other,” says Yeoh. “‘She’s older, so she’s going to be jealous of the young one. They’re going to fight over a man.’ It’s all absolutely not true, and it’s a silly thing to encourage.”

And in this version of space, there’s no glass ceiling. “In Star Trek‘s utopian future, many of the gender issues have been rectified,” says Martin-Green. “It’s common to see a woman of color in power.”

The costumes alone–female officers once sported skimpy skirts and now wear practical pants–mark the progress women have made in the Star Trek universe. In 1995, Kate Mulgrew became the first woman to sit in the captain’s chair in Voyager. Twenty years after Voyager, Discovery showrunners Aaron Harberts and Gretchen Berg say that CBS neither pressured them to write their female heroes as if they were men in order to make them more authoritative, nor did they ask them to glam up the characters’ looks.

Yeoh was surprised when journalists began to ask her about breaking ground as a woman of color starring on a network series. “I grew up in Malaysia, with many races living all in one place,” she says. “We embraced diversity a long time ago. So it never comes to my mind until someone points it out.” In recent months, Yeoh–who made her mark playing female warriors like Yu Shu Lien in Crouching Tiger and Jessica Yang in Supercop–has found a younger fan base. “The waves it’s caused through Asia have been incredible, more so than for anything else I’ve done because it’s Star Trek,” she says. “And for little girls to think, I’m Asian, but I can be the captain of that ship too, that impact is immeasurable.”

Which has been the point all along. Trek‘s creator, Gene Roddenberry, set out to tackle issues like race and class at a time when television was populated by white families living in the suburbs. To that end, Discovery will feature the first openly gay series regular on TV. (The film Star Trek Beyond revealed that Sulu is gay.) And the writers promise that despite a heavy investment in special effects, they will use the series to continue taking on social and political issues. Martin-Green, too, wants to push for more progress. “I always say I think we have to have a healthy discontent,” she says. “We have to be at once celebratory of the change that has happened while at the same time yearning for more and realizing that we’re not done.” To go boldly, in other words. 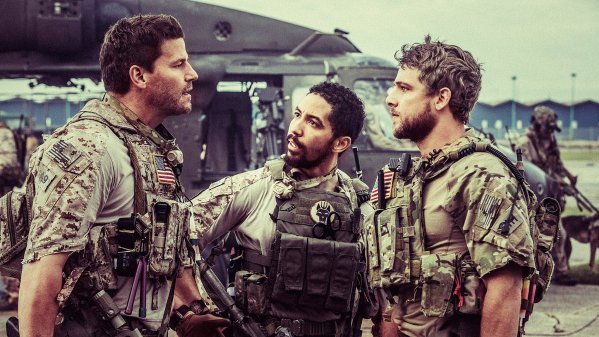