Puerto Rico Could Be Left Without Electricity for Months. Here's What to Know

Hurricane Maria hit Puerto Rico directly on Wednesday, landing as a Category 4 hurricane in the town of Yabucoa with sustained winds of up to 155 mph (250 km/h). The storm destroyed hundred of homes and knocked out power across the island, reports the Associated Press (AP).

Ricardo Rossello, the island’s governor, has imposed a daily curfew between 6 p.m. and 6 a.m. through Saturday to allow for recovery operations. The government said at least two people on the island were killed during the storm, reports AP.

The entire island is now in a total blackout as a result of the storm, with recovery in some parts not expected for an extended period of time.

“Once we’re able to go outside, we’re going to find our island destroyed,” warned Abner Gomez, the island’s emergency management director, according to AP. Here’s what you need to know.

Power was gradually knocked out as Maria pummeled Puerto Rico, according to Vox. About half of all customers of the Puerto Rico Electric Power Authority (PREPA), the island’s sole power supplier, reported a loss of power at 4 a.m. local time Wednesday; by noon, the outage spread to all of PREPA’s 1.5 million customers.

How could a storm knock out power across the whole island?

Puerto Rico’s power grid was already in bad shape even before the 2017 hurricane season. PREPA’s power plants are 44 years old on average, reports Reuters — in contrast with the industry-wide average of 18 years.

The company, which filed for bankruptcy in July, called its own system “degraded and unsafe,” saying in a fiscal plan released this April that “years of under-investment have led to severe degradation of infrastructure,” according to Reuters.

According to Vox, PREPA also faces a manpower shortage that, even before this hurricane season, was already impeding its day-to-day maintenance.

The general economic situation is also grim. Puerto Rico’s finances have been in dire straits for years. The island has yet to emerge from a decade-long recession, and unemployment stands at 11%. Its government entered a process similar to bankruptcy protection in May in a bid to restructure its debt load, currently in excess of $70 billion.

How long is it expected to last?

The combined effects of crumbling infrastructure, financial woes and Hurricane Irma’s impact mean that restoring power across the island is expected to be a difficult process.

“It depends on the damage to the infrastructure,” Rossello told CNN Wednesday evening. “I’m afraid it’s probably going to be severe. If it is … we’re looking at months as opposed to weeks or days.”

Puerto Rican officials think that the power distribution infrastructure might be more badly damaged than power stations, the governor told CNN, adding that power could be more quickly restored if transmission lines turn out to be in better shape than thought.

Why is Hurricane Irma a factor?

Parts of the power grid had just begun to recover from the damage caused by Irma, which skirted north of the island earlier this month.

At the time, over 1 million users in Puerto Rico lost power, according to NBC News. On Tuesday, before Maria slammed onto the island, about 70,000 people were still left without electricity as a result of Irma, CNBC reports.

Rep. Jennifer Gonzalez-Colon, a Republican representing Puerto Rico, told CNBC Tuesday that she has brought up the issue of electric supply with Brock Long, director of the Federal Emergency Management Administration (FEMA).

“We were asking him to have more resources in terms of electrical teams that can help us out to solve the situation and recover the infrastructure of the power grid on the island,” she said. “That is going to be the main issue.”

Has this happened in Puerto Rico before?

Yes. A large fire at a power plant last September caused the island’s whole power system to fail, and left millions in the dark for several days. That disruption was blamed on PREPA’s crumbling infrastructure.

Will the U.S. federal government intervene?

Rossello has asked President Donald Trump to declare Puerto Rico a disaster zone. FEMA announced Monday that Trump had made an emergency declaration for Puerto Rico, which enabled the agency to coordinate relief efforts.

A major disaster declaration would mean an increase in federal resources and programs available for affected areas to recover. But according to Vox, the series of underlying issues with Puerto Rico’s power grid means that federal relief funds, if approved by Congress, would only be of limited help in this regard. 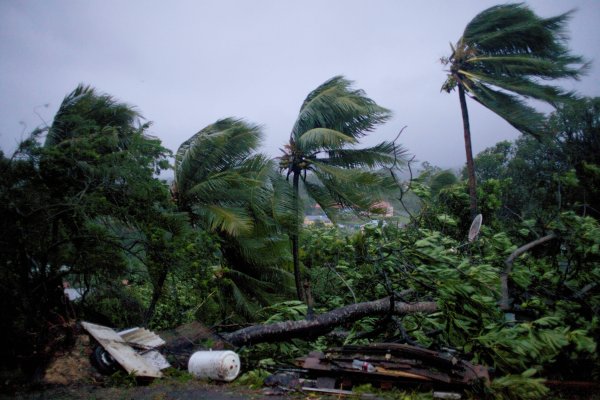