Curious how Taylor Swift prepared to play the biggest role of her life: herself? Now we know, thanks to another new behind-the-scenes video shared from the “Look What You Made Me Do” singer, documenting the film shoot for the intricately self-referential music video of her chart-topping new song. In the video, a number of versions of Taylor over the years all come together to form a mountain of clawing, raging young ladies. To make it happen, Swift’s crew employed a collection of Swiftian body doubles and a helpful green screen.

“OK, this is the trippiest thing I’ve ever seen in my life,” Swift explains in the set footage as she surveys her sea of platinum-haired lookalikes. “Seeing all of them together is the weirdest feeling… It’s like, ‘Oh that’s a phase I went through when I was 16, but a girl is wearing it who looks just like me.’ But we’re having a great time. We’re all just chatting about life. That’s gotta look weird.”

She further explains the premise: “We are all like creating this pile of people who are trying to get to the top, all of whom happen to be like my former selves. Which these girls are so wonderful to, like, do that,” she laughs.

Viewers also get a sense of Swift’s artistic confidence on set, as she calls out directions about which forms of Taylor should be involved in catfights that get extra screen time. And, yes, Swift really does lean into her fight scene.

“I’m not sure where that came from,” she explains after yelling aggressively in character at one of the other actors. “But you know, you just gotta follow the muse.”

We’ll get a better sense of where that muse has taken her when Reputation, her new album, drops Nov. 10. 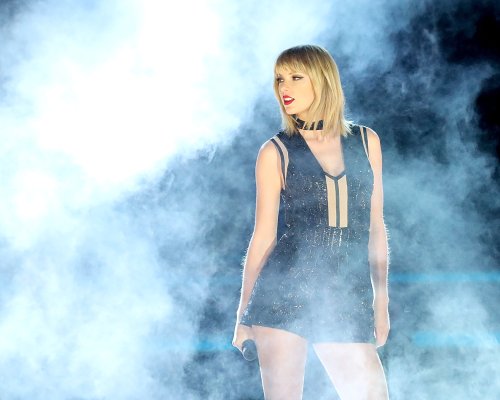 Taylor Swift Is Being Sued Over 'Shake It Off' Lyrics
Next Up: Editor's Pick