Emma Stone has been vocal about the challenges she’s experienced because of her anxiety in the past and she’s continuing to bolster the conversation about mental health by opening up about how it affected her during her childhood.

During an appearance on The Late Show with Stephen Colbert, the Battle of the Sexes star shared that therapy helped her handle her anxiety as a child.

“I was a very, very, very anxious child and I had a lot of panic attacks,” Stone said. “I benefitted in a big way from therapy.”

Stone even shared a drawing that she made while she was in therapy as a kid that depicts her in relation to what she thought her anxiety looked like.

“This is me, I guess. It’s really great artistry with my shoes and then this is anxiety here,” she said. “It’s a little green monster that looks a little bit, as someone backstage said, a uterus with some ovaries. But I didn’t mean for it to be hormonally related in any way. Like I said, I was 9.”

While Stone still has anxiety, she told Colbert that acting has helped her manage it effectively.

“It has always been something that I’ve lived with and it flares up in big ways at different times in my life,” she said. “Sometimes while it’s happening, like while I’m in a phase of big turmoil, it feels like it’s never gonna end — but it does. [Acting] helped me so much, improv helped me so much,” she told Colbert. “I mean, I still have anxiety to this day, not panic attacks — knock on wood.” 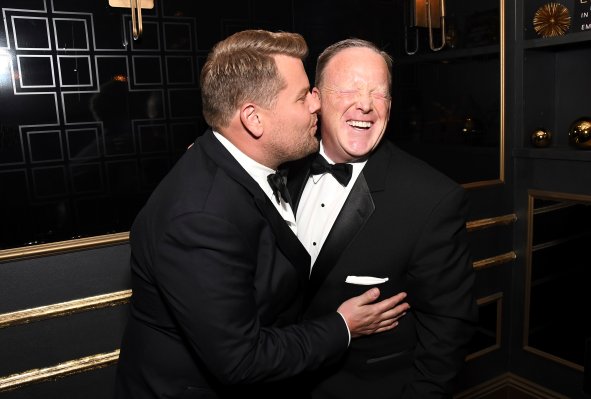 James Corden Responds to Kissing Sean Spicer After the Emmys
Next Up: Editor's Pick