Hillary Clinton strongly denounced President Donald Trump’s speech to the United Nations Tuesday, telling Stephen Colbert the rhetoric was bombastic and inappropriate for the President of the United States.

“I thought it was very dark, dangerous, not the kind of message that the leader of the greatest nation in the world should be delivering ,” she told Colbert during an appearance on The Late Show Tuesday night, adding that she had only seen parts of the speech, not the entire thing.

Trump delivered his first Presidential address to the United Nations Tuesday. In his speech he espoused the “America First” policy that has defined both his candidacy and his administration — arguing that the U.S. paid an “unfair” monetary burden to the United Nations. He also threatened to “totally destroy” North Korea if it continues to build up its nuclear arsenal, calling the country’s leader Kim Jong Un “Rocket Man on a suicide mission.” He slammed the 2015 Iran Nuclear Deal as “one of the worst and most one-sided transactions the United States has ever entered into.”

The former Secretary of State said that diplomacy should always be paramount, and that Trump should have stressed the need for countries to work together to stop North Korea, rather than taunting Kim Jong Un.

“You should lead with the commitment of trying to avoid conflict however you can,” she said.

Clinton’s appearance on The Late Show comes a week after the release of her memoir, “What Happened,” which chronicles her account of the 2016 election that resulted in her shocking loss to President Donald Trump. “I really feel like I’ve done my best to lay out what happened here so that it doesn’t happen again,” she told Colbert of her reasons for writing the book. In the book, she blames her flaws as a candidate for her unexpected defeat, but also highlights the impact of Russian interference in the election. (Her book argues at one point that Trump has a “bizarre fascination with dictators and strongmen,”including Putin and Kim Jong Un.)

“I don’t think anybody can with a straight face say the Russians did not set out to influence our election,” she told Colbert Tuesday night, noting that she was acting like Paul Revere in terms of spreading her alarm about this influence. 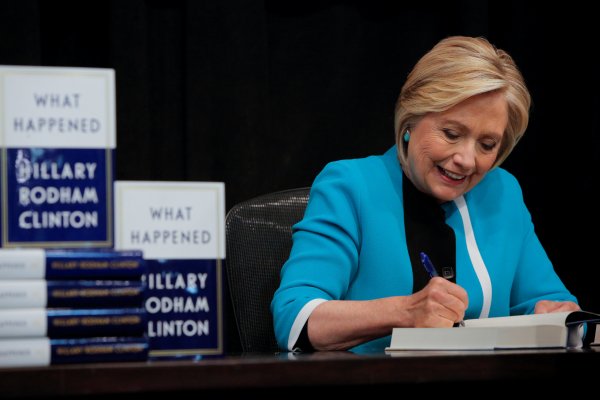 Hillary Clinton: It's Time to Abolish the Electoral College
Next Up: Editor's Pick