Following his surprise appearance at the 2017 Emmys, Sean Spicer says he regrets making false claims to the press during his first briefing under President Trump.

“Of course I do, absolutely,” Spicer told the New York Times of regretting his infamous claim about the crowd size at Trump’s inauguration.

The former White House Press Secretary got off on the wrong foot with the media almost immediately following Trump’s swearing-in to office in January by doubling down on incorrect assertions that Trump’s inauguration drew the “largest audience to ever witness an inauguration, period.” Analysis of the crowd size showed that the audience for Trump’s inauguration was about one-third the size of that for former President Barack Obama in 2009.

Spicer mocked himself at the Emmys with a one-line joke: “This will be the largest audience to witness an Emmys, period — both in person and around the world.” His appearance was controversial among those who criticized the joke as making light of Spicer’s time in the White House, and garnered a shocked response from the audience at the awards ceremony.

Spicer, who resigned from his position as press secretary in July, kept his Emmys appearance a secret until he got on stage. He said he hoped Trump would not be offended by the gag: “This was an attempt to poke a little fun at myself and add a little bit of levity to the event.” 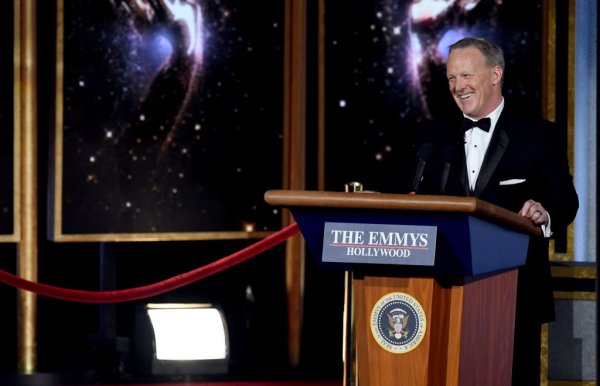 The Internet Is Not Happy About James Corden Kissing Sean Spicer
Next Up: Editor's Pick