These 10 Photos Show Off the National Monuments Trump May Target

In late August, Interior Dept. Secretary Ryan Zinke sent President Donald Trump the results of an unprecedented review. Trump had tasked him with deciding whether 27 national monuments — protected areas that presidents can designate using the Antiquities Act — should remain as they are or be modified. The question divided communities from coast to coast, with supporters arguing that monuments are important to preserve landmarks and animal habitats, while opponents argued that the designations are examples of government overreach and disrupt economic activity like fishing and logging.

Millions of public comments were submitted as part of the review. But, while Zinke said in August that he was recommending that some monuments be changed, he did not publicly announce which ones. A recently leaked internal memo has now identified those he highlighted in his report, some of which Zinke says should be shrunk and some of which he says should be subject to different rules.

The final decision will be up to Trump. Here are the places he’ll be considering:

The northernmost boundary of the Bears Ears region, along the Colorado River, in southeastern Utah, on May 23, 2016.
Francisco Kjolseth—The Salt Lake Tribune/AP

Former President Barack Obama designated this 1.3-million-acre area of Utah as a national monument at the behest of Native American tribes, who have long considered the landscape sacred and who continue to gather herbs and medicine from the land. However, Zinke has said that the area is bigger than necessary to protect special sites, noting that the Antiquities Act requires presidents to set aside the “smallest area compatible” with preserving historic or scientific objects of interest.

A view of the Grand Staircase-Escalante National Monument from the north end looking south outside Boulder, Utah, on May 11, 2017.
George Frey—Getty Images

A driving force behind the review was Utah’s congressional delegation, which has argued that monument designations hurt locals who depend on the land for a living. Designations often come with new restrictions about how land can be used, banning activities such as mining or using off-road vehicles. In recommending that the boundaries be revised and rules revisited at Grand Staircase-Escalante, an area named for descending plateaus, Zinke mentions coal and oil deposits as well as concerns of local ranchers.

Zinke recommended shrinking the boundaries of Gold Butte, a monument in Nevada designated by Obama. In the memo, Zinke mentions issues locals have raised about grazing cattle and existing water rights. The nearly 300,000-acre area contains ancient remnants like petroglyphs, as well as rare desert plants, but critics have argued that it’s too large.

Mount Shasta, is located at the southern end of the Cascade Range in Siskiyou County, California.
Carol M. Highsmith—Buyenlarge/Getty Images

Cascade-Siskiyou, which sits at the crux of converging ecosystems, was the first national monument to be set aside for its biodiversity. Designated by former President Bill Clinton and expanded by Obama, the area also contains lands that have historically been used for timber production. An association representing timber mills has sued over Obama’s expansion, arguing that Congress already designated those lands for logging. Zinke recommended that the boundaries be altered and noted predicted drops in timber sales.

Obama set aside the area of New Mexico know as Organ Mountains-Desert Peaks National Monument in 2014. In his memo, Zinke mentions several issues with the monument that may lead to changes in how the land is used and managed, ranging from border security issues to the economic dependence of the “robust ranching community.”

Another monument that may soon be altered in New Mexico is Rio Grande-Del Norte, an area that contains prehistoric dwellings as well as plains marbled by rivers and hills. As with other monuments mentioned in his memo, one change proposed by Zinke is getting Congress to give Native American tribes official co-management of cultural areas currently contained in the monument’s boundaries.

Rose Quimby, who made a fortune by co-founding Burt’s Bees, donated vast tracts of private land in Maine to the federal government, with the understanding that Obama would protect the area as a national monument. Some locals have complained that they had better access to the land — for activities such as hunting or snowmobiling — before the land was public, because of mutual understandings between landowners. Zinke recommends amending the rules to take those concerns into account, as well the potential for timbering in the densely forested area known as Katahdin Woods and Waters.

This undated file photo released by the National Oceanic and Atmospheric Administration made during the Northeast U.S. Canyons Expedition 2013, shows corals on Mytilus Seamount off the coast of New England in the North Atlantic Ocean.
NOAA Office of Ocean Exploration—AP

Also designated by Obama, Northeast Canyons and Seamounts is the first national monument to be named in the Atlantic Ocean. While supporters have cheered the protection of plant and animal species, commercial fishermen have balked at new restrictions on their use of the waters. A lawsuit, currently pending, argues that presidents don’t have the authority to designate any monuments beyond dry land. While Zinke does not address that issue in his memo, he does recommend that rules be altered so commercial fishing is allowed.

This photo provided by NOAA, taken in May 2016 shows bleaching and some dead coral around Jarvis Island, which is part of the U.S. Pacific Remote Marine National Monument.
Bernardo Vargas-Angel—AP

The Pacific Remote Islands National Monument has been touted as one of the largest marine protected areas in the world, encompassing an area three times the size of California. It contains several islands and atolls to the south and west of Hawaii. In his memo, Zinke argues that fishing in the area has been economically important for the population of American Samoa and recommends that rules be changed so that kind of activity is still allowed. He also recommends reconsidering the boundaries, which may lead to them being shrunk.

This image taken by a crew member aboard the International Space Station during Expedition 13 shows Rose Island in American Samoa.
NASA

Another marine monument, designated by Obama in 2009, Rose Atoll is a protected area in the South Pacific. The monument was established to protect coral ecosystems, including the wildlife that lives there, and to that end commercial fishing was prohibited. Zinke also mentions American Samoa’s economic dependence on fishing in his notes about this monument, saying that the boundaries should be reconsidered and commercial fishing allowed. 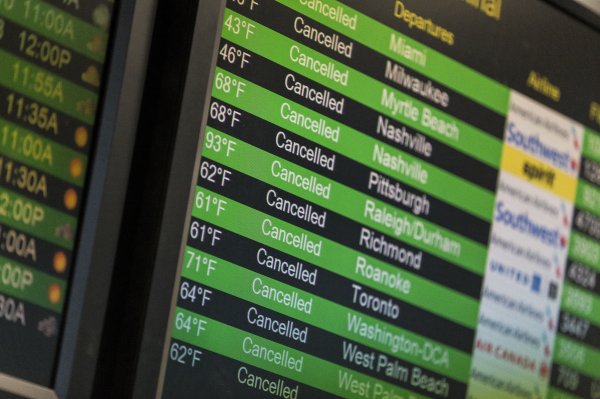 The 10 Most Hated Airports in the U.S.
Next Up: Editor's Pick