Producer and star Reese Witherspoon stepped up to the microphone first, thanking the Academy, cast, crew, and author Liane Moriarty for creating the characters.

‘Thank you to the people that embraced this,” fellow producer and star Nicole Kidman chimed in. “The power of television, it has astounded us. As much as the show had the entertainment value, it was about issues. We are so grateful you told your friends to watch the show; you can still watch it.”

“It’s been an incredible year for women in television,” Witherspoon said. “Thank you for giving us these stories.”

The critically acclaimed seven-episode miniseries, based on Liane Moriarty’s bestselling novel, followed a group of mothers embroiled in a murder mystery in the sunny coastal town of Monterey, California. Well, it was a lot more than that, too: Creator David E. Kelley, along with his star-studded, female-fronted cast — namely Reese Witherspoon, Nicole Kidman, Shailene Woodley, Laura Dern, and Zoë Kravitz — captured the dark comedy of wealthy family life in the adaptation, while also tackling tough commentary on the travails of motherhood, marriage, and muted ambition. It’s a whodunit full of nuance on women and power that unfolded in the most picturesque, escapist setting in America.

And it’s no wonder talk of a second season began as soon as the stellar series aired. “Everybody’s game for getting the band back together, but we want to make sure that we’ve got the music to justify it,” Kelley told EW of a potential follow-up. “That decision hasn’t been made yet, and it’ll be story-driven when it is.”

The series nabbed 16 nominations at the Emmys, including ones for Dern and Woodley in the Supporting Actress category, Alexander Skarsgård for Supporting Actor, and Kidman and Witherspoon for Lead Actress.

Big Little Lies beat out fellow HBO nominee The Night Of, as well as National Geographic’s Genius, and FX’s Fargo and Feud: Bette and Joan. 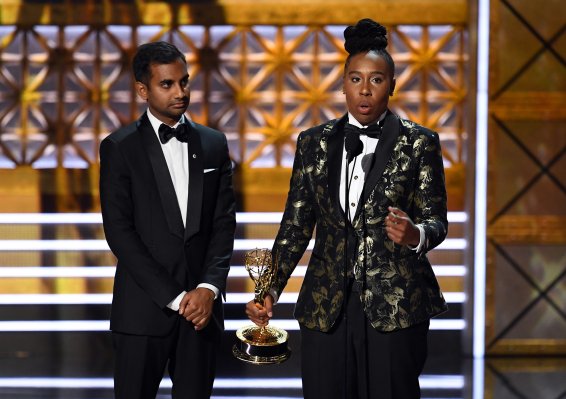 Read the Full Transcript of Master of None Writer Lena Waithe's Moving Emmys Speech
Next Up: Editor's Pick