Review: Colbert Aside, Inclusive Winners Made for a Refreshing, Sharp Emmys

Last year’s Emmys were memorable — insofar as casual TV viewers remember any single Emmys ceremony beyond the night it airs — for two things. One was host Jimmy Kimmel’s vocal anger over then-presidential nominee Donald Trump, at one point yelling at audience member Mark Burnett, the former producer of The Apprentice. The other was the dominance of Game of Thrones.

It’s hard to say which absence was more striking during this year’s Emmy Awards, which aired Sunday night. Game of Thrones‘s ineligibility for awards (having aired outside the eligibility window this year) opened the door for a mass quantity of wins by newly-minted Best Drama The Handmaid’s Tale, Hulu’s post-apocalyptic drama about a world defined by its hatred of women. And yet the show, for all that it was hosted by CBS’s relatively politically engaged late-night host Stephen Colbert, didn’t just ditch Kimmel’s somewhat stagy anger — it seemed in large part disengaged from the world outside of the TV set’s four walls.

Which is fine! After all, as Colbert talk-sang in his introduction, everything is better on TV. And there’s nothing wrong with escapism. But a host whose rise to prominence—it’s hard to remember now, but at the time of his booking at Emmys host, Colbert was in a near-existential ratings lag behind apolitical competitor Jimmy Fallon — has been fueled by a sharp understanding of the current political scene fell a bit short. The introduction didn’t quite ignore that TV wasn’t escapist (after all, the eventual Best Drama winner imagined, or “imagined,” a world in which the rights of women were horrifically constrained) but it couldn’t really deal with it, either. Having a kick-line of Rockette-esque “Handmaids” was easier than reckoning, in comedy, with the troubling drama onscreen. It may have been intended as satire, but it didn’t really have much to say.

Colbert got off some good lines — one about Bill Maher’s freewheeling use of a racial slur comes to mind — but too often seemed dwarfed by the stage. While I was put off by Kimmel’s seemingly put-on anger at Trump, Colbert’s breeziness didn’t seem to suit the room. And filmed bits drawing heavily on the viewer’s awareness of Westworld (OK…) and RuPaul’s Drag Race (hmm…) seemed to misunderstand the uniting role a show like the Emmys can play in an increasingly fragmented TV landscape. Even now having found his footing on the big stage CBS is providing him once a week, he doesn’t have a mastery on whatever balance of gravitas and impishness is needed to do gigs like this. His reliance on stunts — more on one in particular later — only made him seem smaller, the substitute for whomever will be doing the job next year rather than his own sharp self.

Before moving on to the bulk of the ceremony as briskly as the show left its own host behind, it’s worth noting Colbert’s mindless trotting-out of Sean Spicer during his monologue. It’s hard to imagine he thought asking the former White House Press Secretary to riff off of his eight-month-old lie about the crowds at the inauguration was funny. At this point, the deed is too old for relevance, but too recent for the type of absolution Colbert sought to grant. The host was, there as elsewhere, chasing relevance with bleeding-edge references to current events that were more urgently fresh than they were humorous. Spicer’s sins against the truth may not be not world-historical, but it’s a bit soon to turn them into a joke, particularly one whose punchline is as flaccid as “remember when this happened?”

Elsewhere: The many, many Handmaid’s winners generally elided politics in their speeches — in Best Actress in a Drama winner Elisabeth Moss’s case, that may be because of a sudden awareness of quite how severely the clock was ticking. (Both Moss and her male counterpart, This Is Us‘s Sterling K. Brown, saw their mics cut with rather startling brusqueness, in Brown’s case at the climax of one of the better-thought-through speeches in recent memory.) And there was much humor but little nutrition in the speeches around Best Comedy winner Veep, collecting its third win in that category even as its content has verged farther from comment on our political system and toward warped character study.

But just as TV is finding new energy outside conventional forms, winners outside the Best Drama and Comedy fields gave the show the charge its host couldn’t find. At its best, this show made TV feel urgent and necessary both for its longstanding ability to reach broadly out to an audience and its growing ability to draw broadly upon a pool of talent. Emmy-winning director and actor Donald Glover (of FX’s comedy Atlanta) and winning writer Lena Waithe (of Netflix’s Master of None) made mention of their own realities — in Glover’s case, the growing uncertainty of the black community under President Trump, and in Waithe’s, the ways in which her queer identity has given her a superpower or “imaginary cape.” Riz Ahmed, who even among a generally very good slate stood out as a wonderfully deserving winner for his performance in the miniseries The Night Of, thanked The Innocence Project for helping him research his role as a kid up against the justice system. These speeches weren’t just the politically expedient equivalents of the pinned-on ribbon in whatever color is deemed most needed this year; they represented creative lifetimes’ worth of thought by artists who are irrepressibly themselves and whom TV is lucky to have.

The evening was stolen by a performer about whom that’s definitely true: Big Little Lies star Nicole Kidman, who won the Best Actress prize for her miniseries, gave a gracious and ever-so-slightly self-deprecating speech that took a turn toward seriousness. Kidman addressed the themes of domestic violence her work exposed in such a raw manner. Then, called to the stage shortly after for the Best Miniseries prize, Kidman spoke briefly about her bond with coproducer and costar Reese Witherspoon: “This is a friendship that created opportunities out of our frustration, so now — more great roles for women.” It was a clearly-expressed, coherent vision of what television could do and be, what it could mean for those who create it as well as those who watch it.

The television Kidman, as well as so many other winners, make is one of unprecedented inclusiveness across its own history and across all media at the moment. Throughout the show, that point outshone the trappings and the host and made a clear point about the moment in which we live — one in which there’s much upheaval but also much energy. “Go home, get to work,” said The Handmaid’s Tale creator Bruce Miller, accepting the Best Drama prize. “We have a lot of things to fight for.” The message came through loud and clear. But then, it had been through so many winners’ speeches throughout an ultimately terrific ceremony. 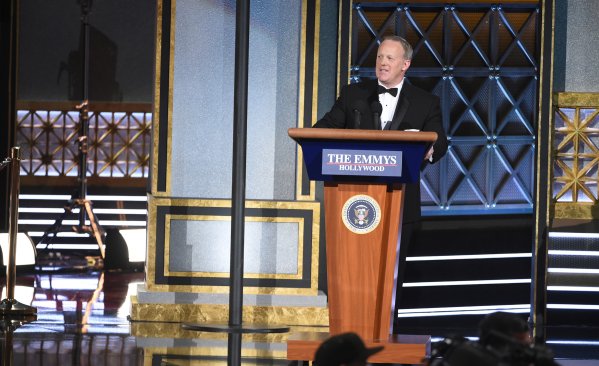 See Celebrities' Reactions the Moment Sean Spicer Showed Up at the Emmys
Next Up: Editor's Pick