Stephen Colbert pulled no punches during his opening monologue at the Emmys Sunday night. The host of the awards show said he looked forward to President Donald Trump’s many tweets over the course of the evening, hinting that he would be cracking jokes about the commander in chief throughout the night.

He began by poking fun at Hollywood itself. “This room is crackling with the collective energy of people who for the last 24 hours have consumed nothing but distilled water and Crest Whitestrips,” he said.

He also offered some advice. “Don’t forget to thank everyone for getting you up here, especially Game of Thrones for being ineligible this year,” he said. (Here’s why the hit HBO show won’t be winning any awards this year.)

He later cracked: “I’m sure HBO will win a lot of Emmys tonight which they’ll have to melt down to pay for next year’s hacker ransom,” alluding to the hackers who released episodes of Thrones earlier this year.

He also took a jab at fellow late-night television host Bill Maher, who earlier this year dropped the n-word on his show and faced swift backlash. Pointing out that the Emmy nominations are more diverse than ever this year, Colbert said, “There are so many talented African-American nominees” and listed a few of the frontrunners, including Samira Wiley and Anthony Anderson. “And of course Bill Maher. I assume he’s black since he’s so comfortable using the n-word.”

Colbert then went on to remind the audience that Trump’s reality television series, The Apprentice, was nominated for an Emmy three times and lost all three times. At the time, Trump called the awards show rigged and even repeated that he should have won during presidential debates with opponent Hillary Clinton.

“If he had won an Emmy I bet he wouldn’t have run for president. So in a way, this was all your fault,” Colbert said. “I thought you people loved morally compromised anti-heroes. You loved Walter White. He’s just Walter much whiter.”

But Trump didn’t win, Colbert said, because “unlike the presidency, Emmys go to the winner of the popular vote.”

Finally, the host brought out none other than Trump’s former White House Press Secretary Sean Spicer (who has been lambasted by Melissa McCarthy on SNL) for a bit — to the shock of the audience and especially McCarthy. Colbert asked Spicer how many people would tune into the awards show. He replied: “This will be the largest audience to witness an Emmys period — both in person and around the world,” a reference to contested reports of the size of the crowd at the presidential inauguration.

“That really soothes my fragile ego,” Colbert replied. “I could see why you’d want one of these guys around.” 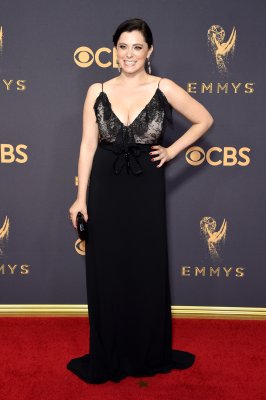 Rachel Bloom Actually Paid for Her Emmys Gown: 'I Am Not a Size Zero'
Next Up: Editor's Pick