President Donald Trump retweeted posts from two Twitter accounts Sunday — both of which have histories of hate-filled posts including anti-Muslim sentiments.

Trump retweeted a video, which was posted by a user with the handle “Fuctupmind” Sunday morning, that depicted him striking Hillary Clinton in the back with a golf ball. The retweet came amid a series of Trump Twitter posts that included him defending his agenda and sharing details of his call with North Korea.

“Donald Trump’s amazing golf swing #CrookedHillary,” the caption of the original tweet by @fuctupmind reads, which includes a GIF of the president hitting a golf ball at a person that appears to be Hillary Clinton.

TIME’s search of this Twitter user’s feed reveals several tweets with offensive comments about Muslims and Islam. “While people mourn, and change their Facebook profile pictures as a result of the #LondonBridge attack, here is how Islam feels right now,” the user wrote in the aftermath of a terror attack in London this past June, along with a GIF of a man dancing.

“Let me sum it up. Normal people don’t like Islam. We don’t want it. If you want it, go to the middle east and enjoy it. Or Europe,” the user wrote in a Twitter conversation on April 12.

In the aftermath of the Charlottesville attacks, the user, who only identifies himself as Mike, criticized the responses from leading Democrats, including Bernie Sanders, Joe Biden, and Clinton, for condemning the white nationalist rally that was taking place.

The user also decried characterizations of the “Unite the Right” rally as a hate group. “White people holding torches and standing there is hardly a “hate group,” one tweet reads. “Stop being racist, twitter.”

Trump also retweeted several images on Sunday from an account with the handle @Team_Trump45 that depicted the influence of his “Make America Great Again” agenda. A search by TIME of this user’s account also reveals various discriminatory posts about Muslims, including several that falsely characterize former President Barack Obama as a Muslim. The user blocked a TIME reporter when asked for a comment.

“Obama can take his gay rights agenda and shove it. He’s the only confused Muslim for gay rights & our POTUS. He is a legend in his own mind!” the user tweeted on December 29, 2016. That same day, he posted another photograph of Obama with the caption “get your Muslim feet off President Trump’s desk.”

This is not the first time the President has been linked to retweeting people who have a history of offensive or discriminatory remarks. In July, Trump posted a video to his account depicting him punching a physical representation of CNN in the face. Shortly afterwards, it emerged that the video had originated on Reddit, and the user who took credit for creating it had made anti-semitic and anti-Islamic memes in the past.

And during his presidential campaign, Trump came under fire for posting an image — which had reportedly appeared on a website that attracts Neo-Nazis and white supremacists — on Twitter that resembled a Jewish Star of David while criticizing Clinton. 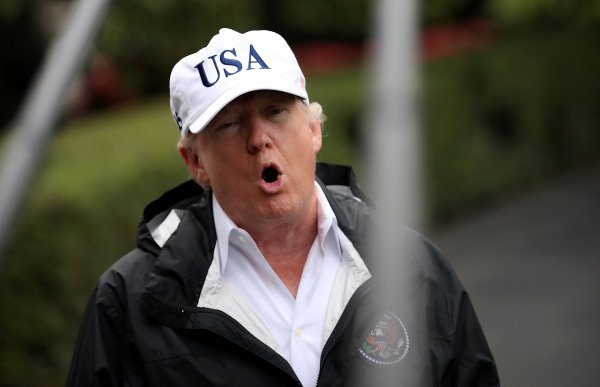 Trump Blames 'the Other Side' in Charlottesville
Next Up: Editor's Pick