One of the three Gainesville, Fla. “hot cops” that went viral for their looks earlier this week has been suspended after the Gainesville Police Department received complaints regarding anti-Semitic posts on Facebook.

Officer Michael Hamill, who told TIME on Wednesday that he’s “never had this much attention before,” allegedly made the remarks on his personal Facebook page, the Gainesville Sun reported Thursday. In response, the Gainesville PD issued a statement Friday that Hamill had been suspended with pay.

“GPD is reviewing the allegations and will do so in accordance to Florida law and department policy,” the statement reads, adding that the department “takes these allegations extremely seriously.”

A screenshot of one of the Facebook posts sent to the Sun dates back to 2011, the paper reported. Two more screenshots were from an April 2013 post.

Hamill, along with Officers Dan Rengering and Josh Nordman, first gained viral attention Sunday due to a photo posted on the department’s Facebook page that showed the trio working during Hurricane Irma. The post received more than 181,000 comments, 517,000 likes and 276,000 shares, the Sun reported, before the post was deleted, presumably due to the allegations against Hamill. 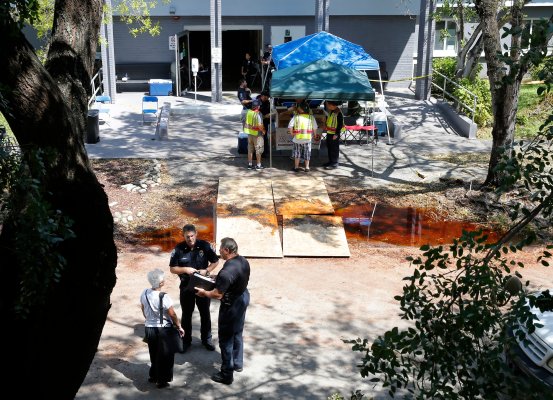 Families Want Justice After 8 Die in Nursing Home
Next Up: Editor's Pick